How London's Rivers Got Their Names

By M@
M@ How London's Rivers Got Their Names

London's only river whose name sounds like a Hollywood film star. It's actually a corruption of beaver brook, after the toothsome mammals that once frolicked in its waters. The nine-mile river rises in Worcester Park and flows through Wimbledon and Richmond before spilling into the Thames at Barn Elms.

Unlike many of the other rivers here, this 18-mile watercourse still cuts a visible meander through the terrain of north-west London. It's also thought to have one of the most ancient names, dating back to pre-Roman times. Scholars believe it's derived from the Celtic word brigant, meaning 'elevated' and also has associations with the goddess Brigantia. The borough of Brent, Brent Cross and the area of Brentford both take their names from this river.

A small stream that once flowed from Kensal Green down past Olympia and Brompton Cemetery to flow into the Thames at Chelsea. 'Counters' is believed to derive from Countess — specifically Countess of Oxford Maud (or Mathilda), who held the Manor of Kensington in the 14th century. The bit nearest the Thames was canalised in the 19th century, and is today partly followed by the Overground route past Olympia.

These two watery playfellows rise south of Camberwell and Peckham respectively to merge together into a kind of Y-fronts conformation, before bothering the Thames at Rotherhithe. Earl's Sluice is probably named after the first Earl of Gloucester (son of Henry I). As for the Peck, it's name is a back-formation from Peckham (i.e. the town was named before its stream). Where Peckham got its peck from is a little uncertain, though the Oxford Dictionary of English Place Names suggests the Old English word pēac, meaning a hill, might have something to do with it — the land certainly does rise to the south. You can actually paddle in the Peck — a short ornamental section dribbles through Peckham Rye Park.

A buried river, well-known thanks to its course under Effra Road, Brixton. The name is thought by some to be of similar pronunciation to an Anglo-Saxon phrase meaning 'runlet of water, fountain, spring, stream'. Others say it's Celtic for 'torrent'. A third theory posits Effra as a particularly lazy corruption of 'Heathrow', the name of a former manor in the area (and nothing to do with the airport). It might even have been named for a local farm as late as the 19th century. Perhaps the spooks at MI6 can puzzle it out; the river flows beneath their building to reach the Thames at Vauxhall.

This stream unites Balham, Clapham and Battersea. It takes its name from the family crest of local landowners the St Johns, which includes a falcon. You'll find many a Falcon (and St John) in the area, including a prominent pub at Clapham Junction.

A very well-known subterranean river, the Fleet today flows as a sewer from Hampstead Heath via King's Cross and Farringdon to reach the Thames beneath Blackfriars Bridge. The name is a common one across the land and comes from the Anglo-Saxon word flēot. In case you've never taken the considerable trouble to learn Old English, this describes a tidal inlet, which the Fleet remained until relatively modern times. The Holbourne (various spellings) is also associated with the Fleet. It is variously described as a former tributary or another name for the main Fleet itself, in the area known as Holborn today. That word means 'hollow brook' or possibly 'old brook'. Read more in our paddle through the River Fleet.

Easy. It's a brook that flows through Hackney. The name 'Hackney' probably dates from Anglo-Saxon times, though isn't recorded until the 12th century. Those in the know reckon it's derived from Haca’s ey, an ‘ey’ being an area of raised ground in marshland and Haca being some kind of land owner of chieftain. The best thing you can possibly do right now is plug in your headphones and enjoy this edition of Hackney podcast in which Iain Sinclair follows the buried stream.

After the Thames, the Lea is the capital's biggest river. You've probably seen it spelt as 'Lee' in some places. You might, had you lived in former times, also have written Ligan, Ligean, Lygan, Luye or Leye — all of which reflect a probable Celtic root meaning 'bright' or 'light'. The river once formed the boundary between Middlesex and Essex, and — earlier still — King Alfred's territory from the Vikings. Today it merely keeps Tower Hamlets and Newham from squabbling. The Lea has many tributary rivers whose origins we frankly can't be arsed to research.

St Saviour's Dock near the Design Museum gives some indication of the former outfall of Southwark's River Neckinger. The unusual name is thought to come from 'neckercher', an old cravat or neck-cloth, perhaps because of the river's looping profile. There's also an association with the practice of hanging of pirates at the mouth of the river, at a point sometimes known as the Devil's Neckerchief.

Ever since we first discovered this south London river, we've wanted to invite Suggs along, push him in, and sing 'Quaggy trousers, Quaggy trousers' until he tells us to shut up. The oddly-named watercourse is a tributary of the larger Ravensbourne, and supposedly gets its name from the quagmire-like surroundings. Giggity. In its upper reaches, it's also known as the Kyd Brook, hence the placename Kidbrooke.

This 11-mile river rises in Keston, to the south-east of Greater London, hitting up Bromley, Catford and Lewisham before debouching into Deptford Creek. In fact, Deptford gets its name from its erstwhile situation as a deep ford on the Ravensbourne. The origins of the name are uncertain, but one fanciful tradition has Caesar (Julius or Claudius...it's not clear) following a raven to the source of the river in order to find fresh water.

London's only double-entendre river (OK, the Earl's Sluice is another candidate). It oozes from the ground near Stansted Airport, working its way down to Barking Creek and forming much of the boundary between Newham and Barking & Dagenham. Roding is a corruption of Hroda, an Anglo-Saxon boss who presided over settlements in the Roding valley. Towns along its course, like Ilford and Redbridge, also get their names from its aqueous passage.

Like the Lea, the Rom also forms the boundary of two boroughs: Barking & Dagenham and Havering. At this point, smartypants readers will have guessed that Romford gets its name as a ford on the River Rom. Not quite. It's thought that Romford means a 'wide or spacious ford' over a river whose original name is forgotten. Through a linguistic backflip, that river later adopted the name Rom to harmonise with Romford. Fortunately, nobody has yet used a similar backformation to set a rom-com in Romford.

London's only river whose name sounds like a US politician (although we think Tyburn Gallows might have made a good Republican senator). This lost stream separated Hammersmith and Chiswick, and gave its name to the area and Underground station. It's said to derive from Stoney Ford, which doesn't sound at all gubernatorial.

For purely alphabetical reasons, London's most important river finds itself near the foot of this article. Thames is perhaps the most ancient name in the London area, and undoubtedly flows back to some pre-Roman appellation. The Celtic name is thought to have been Tamesas, meaning 'dark', and offering a tempting contrast to the River Lea's light/bright origins. In truth, nobody really knows. Everything in this town eventually seems to get named after Boris Johnson (Boris bikes, Boris bus, Boris Island...), so we might as well assert that Tamesas was a corruption of Boris-ass.

This good old London name is infamous from the execution site, dubbed the Tyburn Tree, from which numerous malefactors could be simultaneously hanged. Before the gallows, there was the river, which still flows as a drain through Marylebone, Mayfair and out near Westminster. You can easily trace its route on a map by looking for the wobbly street lines in these otherwise grid-like areas. But the name? Well, it's a bit dull really. Tyburn derives from the Old English Teo Bourne, which means 'boundary stream'. Because this is such a prosaic derivation, there are other Tyburns around, including the Tyburn Brook (a tributary of the Westbourne). 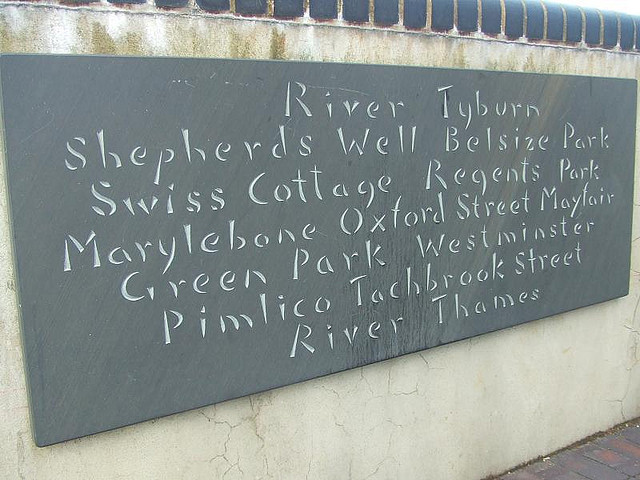 The Romans centred Londinium on Cornhill and Ludgate Hill, the two mounds rising either side of this river. The leading theory on the origins of the Walbrook's name is simply that it was a brook that ran through the City wall (at Finsbury). Another option, though somewhat puzzling, is that it comes from the Anglo-Saxon Weala broc meaning 'brook of the Welsh'.

This river, Wandsworth Town, the wider borough of Wandsworth, and the increasingly ubiquitous Wandle beer all owe their names to a person called Wendle, who controlled the land around here in Anglo-Saxon times. We know absolutely nothing else about Mr Wendle, but thanks for the beer, sir.

By now, you'll have grasped that anything ending in 'bourne' or 'burn' is likely to have something riverine about it. The Westbourne is no different, merely being a river that flows to the west of town. Connecting Hampstead to Chelsea via Bayswater, Hyde Park, Knightsbridge and Sloane Square, it might today be dubbed the Poshbourne. This privilege is reflected in its older name  — Cye Borne, meaning 'royal stream' (and hence Kilburn, where it also flows). Today it's a sewer, and you can poke your head in at low tide like we did. Look ↓ 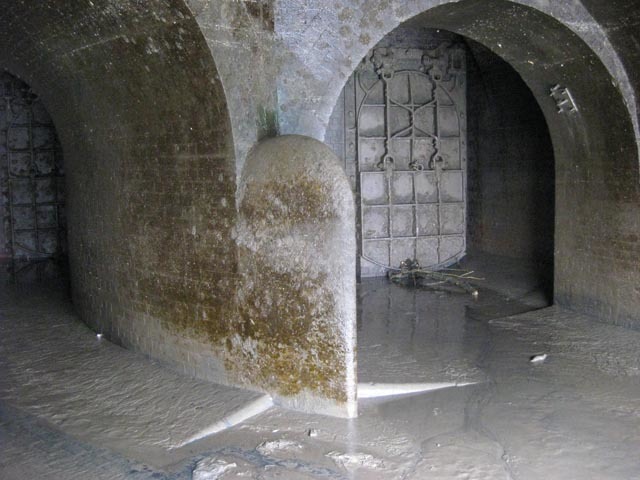 We're aware this is not a complete list. In fact, it's nowhere near. London contains dozens if not hundreds of streams, tributaries, rivulets, ditches and other channels not listed here. We give it 10 minutes before someone leaves a comment to say 'You've forgotten the Bollo Brook, you arse', or 'I can't believe you tosspots missed off the Cock and Pye Ditch'. So be it.

All images by the author.