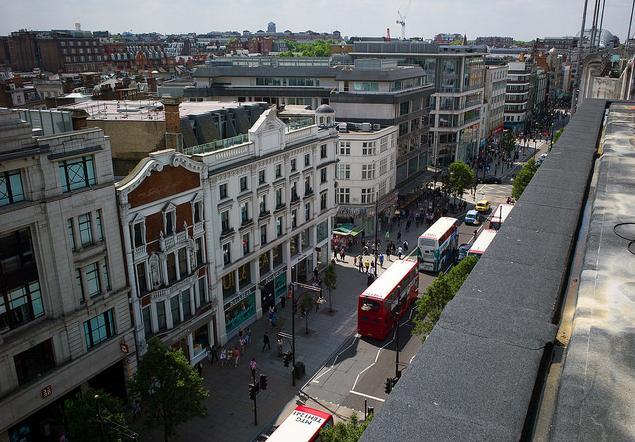 Oxford Street has the worst levels of nitrogen dioxide (NO2) air pollution in the world, according to an air quality scientist at King's College.

Dr David Carslaw told the Sunday Times that NO2 levels on the shopping strip are averaging 135 micrograms per cubic metre of air over the last year, and have spiked as high as 463mcg/m3. The EU's limit for NO2 is an annual mean of 40mcg/m3. There's another EU measure that says NO2 levels should not exceed 200mcg/m3 in an hour more than 18 times a year; last year we found out that 78% of London's roads break that one.

The Evening Standard quotes a City Hall spokesman denying the claim our NO2 levels beat places like Beijing, saying "contrary to any misleading claims, London’s levels of air pollution are lower than many world cities". We can't find NO2 figures for Beijing or Delhi, but there's this EU data from 2012: it doesn't have the Oxford Street monitoring site for a direct comparison, but Marylebone Road registered an average of 94.26mcg/m3. The highest average level in Paris was 82.61mcg/m3, Rome was 72.62mcg/m3 and Berlin 60.49mcg/m3.

The problem with Oxford Street is the sheer number of diesel buses travelling (or, more likely, standing still with engines going) and that the street's a 'canyon' — tall buildings set fairly near the road so fumes can't dissipate easily. Modern diesel engines emit more nitrogen dioxide than petrol, and we've been switching to diesel to lower carbon dioxide emissions. NO2 affects people's respiratory systems and can react with sunlight to create ozone and particles like PM10s.

An immediate way to deal with the Oxford Street problem is to cut the amount of traffic, and City Hall says the number of buses using the street has decreased by a fifth. But the long-term solution is to use more green technology — hybrids and electric vehicles — instead of pumping out diesel fumes, rather than cutting back on public transport or shunting it to other roads.

Photo by Konstantin Binder from the Londonist Flickr pool