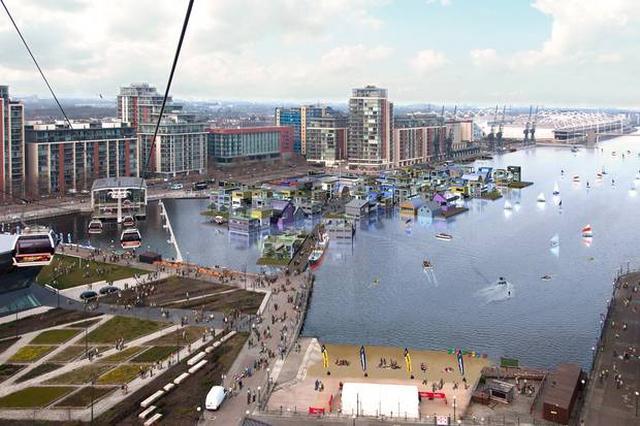 Newham's mayor is seriously unhappy about City Hall's plan for a floating village in the Royal Docks. Sir Robin Wales has described it as creating a "yuppie ghetto".

This floater has been bobbing around for some time, but today Boris Johnson announced a developer for the scheme, Carillion Igloo Genesis. The development will be completely over the water, anchored in place using piles and connected to each other and dry land by a series of walkways and bridges. Sounds great — except there will initially be only 50 homes among the restaurants and cafes, and given that each new owner will be able to have input into the design, it's safe to assume they'll be out of the reach of the likes of us.

"Newham Council cannot, and will not, accept a development consisting purely of luxury apartments which will be out of reach of the majority of our residents... The GLA and Carillion Igloo Genesis need to look again at their plans and ensure that there is sufficient affordable housing provided by the scheme and a range of other amenities to serve the existing community as well as any new residents."

Newham will need to give planning permission before any building can happen, so that's a showdown in the making. Unless Boris Johnson intends to 'call in' the project, like he did with Convoys Wharf and Mount Pleasant. We agree with Newham; this is publicly owned land in a deprived borough, and developing it without genuinely affordable housing in the middle of a housing crisis smacks of stupidity.

Update 24 July: the London Assembly Greens have got in touch with the news that Newham Council yesterday approved ABP's development in Royal Albert Dock, right next to the planned floating village. 845 homes are slated for construction; the scheme website says the number classed as affordable was to be discussed with the council and the Greens tell us the number has been set at — zero. Newham has struck a deal whereby any profits from the development above a threshold of 24.99% will be split between Newham and ABP, to a limit of £60m.

So can we assume Newham is generally OK with 'developments consisting purely of luxury apartments' if they get a cut? That money can go on providing affordable housing elsewhere in the borough, but if the aim is to avoid 'yuppie ghettos', well...