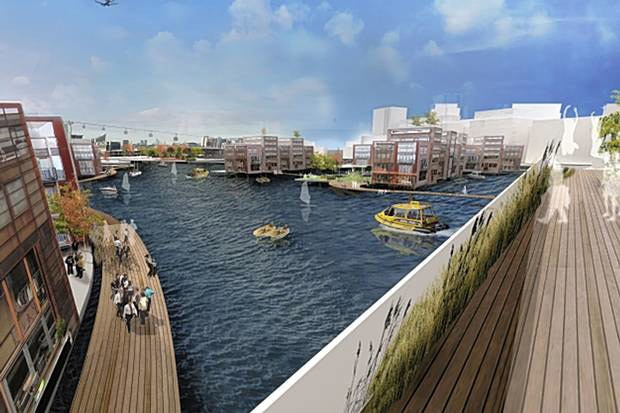 If you build it, they will come. Except it didn't really work for the cable car. Fortunately, the Mayor has a cunning plan: he's going to build a floating village right beneath it. That'll get 'em running.

Mr. Johnson's fascination with floaters is beginning to approach obsessive levels. His 'Boris Island' airport is still under consideration, while the idea for a River Park sank without trace last year. The latest wheeze to emerge from the mayoral cerebrum involves a 15 acre development at Royal Victoria Dock, packed with floating homes, businesses and restaurants.The image above gives an idea of what we can expect: boardwalks, boats and white silhouettes leaping into the air. Bids from architects to design the scheme will be solicited later in the year.

Those with better memories might recall a similar scheme designed by Studio Egret West two years ago. That never made it off the drawing board, but this one has City Hall's backing, and is buoyed by the mayoral gift for spontaneous hyperbole. Speaking at the Mipim property trade conference, Boris said that it had the potential to "become one of the most sought after addresses in London".

Before the expected migration of London's great and good from Mayfair to Newham can take place, the scheme needs to become reality. And that's where we hit a few snags. Campaign group Stop City Airport Masterplan have slammed the idea, accusing the Mayor of "gross negligence" for proposing such a vast development in the airport's crash zone.

One of the intended legacies of the Olympics was to spur on regeneration of forgotten patches of east London such as the Royal Docks, and development in the area is vital.  But would London be better served by a simpler project, one less likely to end up as another costly vanity project for the Mayor's' growing portfolio? Maybe a new bridge in the area would be a better start.