Deptford Housing Go-Ahead To Be Decided By Mayor

The decision on whether to build one of London's biggest new residential developments has been muscled from the relevant local authority by Mayor Boris Johnson. The proposals for Convoy's Wharf in Deptford have long been controversial, and this new twist is causing further tensions.

But first we need some background.

Plans are afoot to redevelop the site, so it will look something like this: 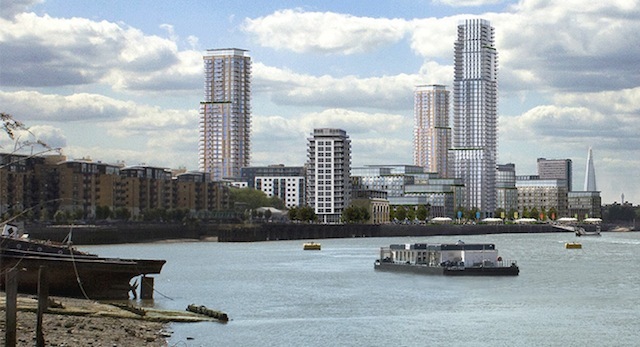 (It's worth noting at this stage that this is still an outline planning application, meaning that the exact appearance of the buildings is only indicative and will probably change, though the general massing will not.)

The developer Hutchison Whampoa plans up to 3,500 new homes, with commercial and retail space. Following fierce local criticism of the original masterplan, the developers brought in Sir Terry Farrell to rework the scheme, and held a series of public consultations, culminating in an open day attended by 350 locals and other interested parties.

A new masterplan has since been released. Deptford Dame gives an excellent critique of both the pros and cons of the new proposal, so we won't go into the details here, but two major sticking points (and many minor ones) remain. First is the site density, which Deptford residents say will put a huge strain on local transport and other resources, while providing only a small percentage of affordable housing. The second is a heritage issue, for Convoy's Wharf used to look like this: 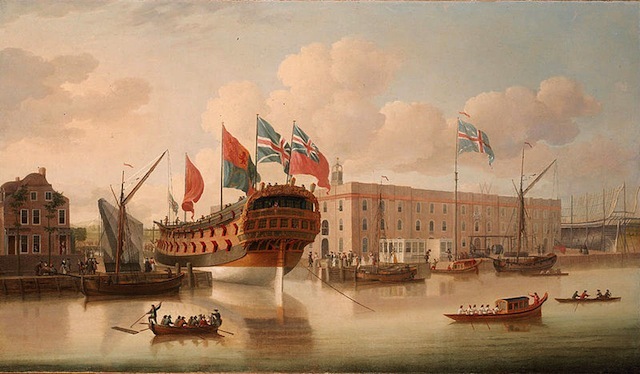 As Deptford Docks, the site was of huge national importance. Key naval vessels were built here from the time of Henry VIII until the Victorian era. Many in the local community believe that this heritage should be celebrated in any new development. The Farrell masterplan makes some concessions such as filling the site with street names commemorating the past. A Grade II listed warehouse building will also be preserved. But many feel this does not go far enough for an area of such significance that it was recently put on the World Monuments Fund's register of threatened heritage sites. One suggestion, for example, is to rebuild the Lenox, a warship serving under the reign of Charles II.

The revised masterplan, which some say is barely altered from what went before, has been under consideration by Lewisham Council since May 2013. But in a new twist, Boris Johnson has used his mayoral powers to wrestle the project away from the local authority. He will now decide if the project should go ahead. As Transpontine notes: "Now even the limited  influence the community has through the Council's planning process has been taken away... this follows lobbying by the developer who claim that Lewisham has been dragging its feet for five years".

Labour Assembly Member Len Duvall commented: "I am disappointed the Mayor has taken this important decision away from Lewisham. The Mayor claims to be a localist, but that’s a principle he’ll drop happily at the request of developers. He has ignored Lewisham’s good record as a planning authority and cites the breakdown of their relationship with the developer as a reason to “call-in” an application."

Like other large residential developments at Elephant and Castle, Shepherd's Bush and Earl's Court, the Convoy's Wharf project will provide much-needed modern housing, but at the risk of alienating many who already live in the area. Whoever makes the decision has a difficult set of often-conflicting interests to juggle. But the calling in of such an important project seems to serve the wishes of big business to the detriment of local communities.

More background on the project can be found on the developer's website, or (for the critical viewpoint) on the Deptford Is website.