The Forgotten Great Theatres Of London

Throughout Victorian Britain, the industrial revolution brought prosperity to industrialists and widespread employment to the working classes. The working conditions were often strenuous and dangerous but by the late 19th century various labour reform laws ensured that safety standards increased while working hours decreased. Normal working people soon found themselves with the newfound luxury of leisure time. Londoners could attend one of the growing number of theatres that were popping up across London’s urban sprawl, particularly in the West End. We sifted through the old ticket stubs and performance programmes to shine the spotlight on some of the grand old theatres of London that disappeared as the city evolved…

Today, many Londoners view Leicester Square as a grimy tourist location that should be avoided at all costs, but it was once the home of the beautiful Alhambra Theatre. With a large domed roof, flanked by two minarets, this opulent Orientalist-style theatre seriously contrasted in size and style with the surrounding structures of Leicester Square. It started life in 1854 as The Royal Panopticon of Science and Arts, which sought to educate its visitors with art exhibitions and live scientific experiments. In 1858, it reopened simply with the aim to entertain. Acts included trapeze artists, variety show singers and risqué performances of the now infamous Can-Can. Indeed, the October 1870 Parisian chorus-line was deemed so sexually provocative that the theatre lost its licence. It was only after a tamer act was discovered — an equestrian ballet, no less — that a new licence was obtained in 1871. 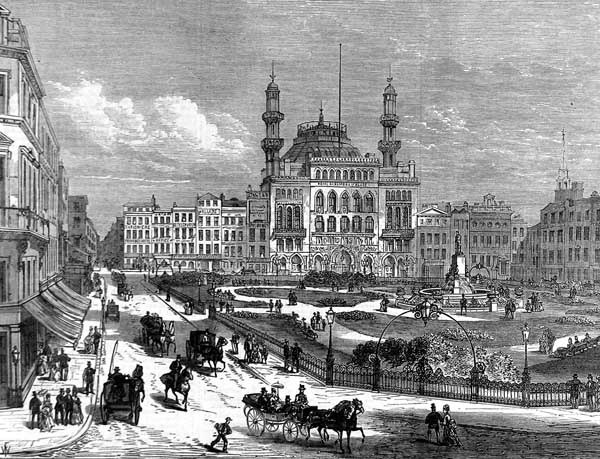 Regardless of scandals, or perhaps because of them (for the theatre’s entrance was a notorious location for prostitutes), the theatre remained a popular venue and was even rebuilt following a devastating fire in 1882. In the 20th century, the Alhambra continued to find success. During the First World War comic musical acts were a favourite with the soldiers on leave. After the war, in February 1925, the theatre held the first live radio broadcast of The Royal Variety Performance attended by the British royal family. Soon after this date, however, live entertainment was eclipsed by the new technology of cinema, and in 1936 the theatre was demolished to make way for the Odeon Leicester Square, which still stands on the site of the Alhambra and boasts the largest single-screen cinema in the UK.

The original St James’s Theatre was a grand neo-classical building located in the wealthy residential district of St James. Opening in December 1835, it would become an important location in Britain’s cultural history for the next 100 years. Ten years into the theatre’s life, the great Victorian writer Charles Dickens appeared, somewhat unexpectedly, as one of the ensemble cast in an amateur performance of Ben Jonson’s Every Man in his Humour.

By the 1890s, the theatre had become the favourite venue for the playwright Oscar Wilde, who used St James’s stage to debut Lady Windermere's Fan, which premiered on 20 February 1892, and The Importance of Being Earnest three years later on 14 February 1895. It was during the successful run of the latter play that drama occurred outside of the auditorium walls, when the Marquis of Queensbury was forcibly banned from entering the theatre, as it was believed that he was due to insult Wilde by throwing a bouquet of rotting vegetables onto the stage mid-performance. The feud had begun when Wilde became the lover of Queensbury’s 25 year-old son, escalating shortly after the event at the theatre into a libel trial that ultimately led to Wilde’s imprisonment for sodomy. 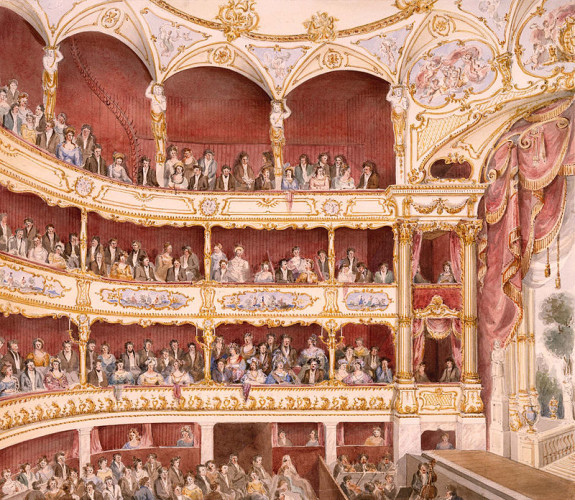 The theatre survived the scandal and continued to premiere new works by George Bernard Shaw and even adaptations of Agatha Christie novels. It survived the Second World War, sustaining only minor damage during a 1944 raid, before coming under the management of Sir Laurence Olivier and his wife Vivien Leigh. These icons of British theatre brought further acclaim to St James’s, starring in critically-acclaimed productions while premiering new works by playwrights such as Terence Rattigan.

Despite these successes, the theatre was forced to close in 1957 as the landowner sold the site to a commercial developer. Vivien Leigh fronted a passionate campaign to protect St James’s from the wrecking ball, during which time she marched on Parliament and gained the support of the House of Lords against the government. In the post-war fervour to rebuild a modern city, however, St James’s Theatre was demolished and replaced by a modern office building. This office building did acknowledge the history of the site by incorporating relief panels depicting famous names associated with St James’s Theatre onto the front-facing balconies, including Wilde and the Oliviers. Ironically, these panels are now hidden down the alleyway between the pub and the 1980s structure that replaced the 1960s offices, showing just how quickly London continues to change.

A theatre stood on the north-east side of the cross-section between the Strand and Aldwych from 1864 until the 1950s. The Strand Musick Hall, as it was originally called, was built on the site of the original Lyceum Theatre, which relocated to its current location just a stone’s throw away on Wellington Street (the one showing The Lion King ad infinitum). 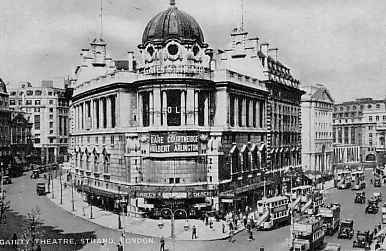 Four years after opening, the theatre was rebuilt in a much grander style and reopened in December 1868 as The Gaiety Theatre, with performances encompassing pantomime, burlesque and operettas. The Gaiety was an important player in the development of the light-hearted musical comedies that succeeded the music hall genre. It was also particularly famous for the Gaiety Girls chorus line, who appear to be the first generation of female performers to gain social acceptance for their theatrical profession. They were charming, witty and always dressed in the latest fashions but with modesty that won them much male interest. Many of these actors, in fact, managed to climb the social ladder into the upper class and aristocracy by marrying their wealthy stage-door admirers.

The theatre closed for renovations in the late 1930s but never reopened, as the building suffered extensive damage during the Blitz. The bombed theatre was demolished in the 1950s and a large luxury hotel now fills the sizable space on the corner of Aldwych. Before the Gaiety was torn down, however, some of the internal fixtures from the auditorium were mysteriously saved and now grace the upstairs bar of The Victoria pub near Lancaster Gate tube.

The housing estate on the corner between St Thomas's Road and Prah Road looks like a fairly typical post-war tower block, but its name Vaudeville Court hints at the theatrics that once occurred on the site. Opening in 1910, The Finsbury Park Empire specialised in the variety acts that had become the most popular form of entertainment by the early 20th century. The 2,200 capacity venue was built by the Moss Empires theatre chain who owned the London Palladium Theatre. This meant that the theatre was the first transfer for West-End acts before they started their national tours and provided north London audiences with all the big stars of the day but without the hassle or cost of visiting the West End.

Over the decades when variety ruled the British stage, the Finsbury Park Empire played host to famous acts such as Laurel & Hardy, Gracie Fields, Tony Hancock and, later on, pop stars such as Cliff Richard & The Drifters, and Shirley Bassey. Although film screenings had featured as part of the theatre’s variety acts since the 1920s, commercial cinema now eclipsed the variety show format as a more profitable business. The Empire fell victim to this general trend and closed to the public in May 1960. In 1961, the theatre was used as a location in the Cliff Richard film The Young Ones but this proved to be a swan-song for the venue, which was subsequently bought by Islington Council and demolished in 1965.

On the northern stretch of Commercial Street between Spitalfields Market and the Commercial Tavern pub, The Royal Cambridge Music Hall stood as a typical example of an early music hall theatre. By the time the theatre opened in 1864, this area of east London already had a high proportion of music hall venues to entertain the heavily populated district. There was the Britannia in Hoxton, the Shoreditch Empire, the Royal Pavilion Theatre in Whitechapel (with regular Yiddish performances) and Wilton’s Music Hall on Cable Street, all in close proximity.

Wilton’s Music Hall is the only survivor of these early music halls and any visitor will feel a certain faded grandeur to this 300 capacity theatre. Imagine, then, how the 2,000 capacity of the Royal Cambridge Music Hall must have felt. The performance programme for Saturday 5 May 1900, available on The East London Theatre Archive’s website, highlights how the demand for live variety acts made theatres profitable businesses. In this single matinee performance there are 18 different acts listed including comediennes, comedy gymnasts, ballad vocalists and dancers, while the bar offers champagnes and liquors, rather than the staple grains available from the local Truman Brewery.

Fires were a common occurrence in a pre-electric world that required artificial light for performances. The Royal Cambridge became the victim of one such fire in 1896 but, such was the enduring popularity of the form, had already been rebuilt by 1898 to the plans of the famous music hall architect William Finch Hill. The growth of local business soon came before the pleasure pursuits of workers, however, and in 1936 the theatre was demolished in order to extend the Godfrey Phillips tobacco factory, the remains of which can still be seen on Jerome Street.