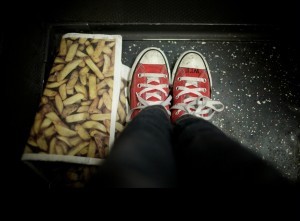 Two 'eat-in' protests have come together next week in response to the now-removed Facebook page which encouraged commuters to post pictures of women eating on the tube.

The protests are actually the brainchild of two separate groups — Women Eating On The Tube: Circle Line Lunch Party and Women Who Eat Wherever The F**k They Want — and will take place on the Circle line on Monday at 1.30pm.

The original Women Who Eat On Tubes (WWEOT) page's creator, Tony Burke, claimed in an interview with the Telegraph that it was 'high art' and 'the London equivalent of wildlife photography' while denying the intent was stranger shaming or sexist. Whether or not you choose to believe that, at the very least it was probably naive to single out women and fail to realise that it was likely to be construed as sexist. Women who found their pictures on the pages also reported abusive and misogynistic comments which were not removed, despite Burke's claim that the intention was not to bully or humiliate.

One of the protest's organisers, Lucy Brisbane McKay, was on Radio 4's Today programme with Burke this morning. Burke continued to refute the feminist argument against WWEOT though did at least acknowledge the question of privacy. You can listen to the clip here.

On Monday, the British Transport Police (BTP) advised women to report any unwanted photography they feel uncomfortable with.