Public Transport And The Rise Of 'Stranger Shaming' 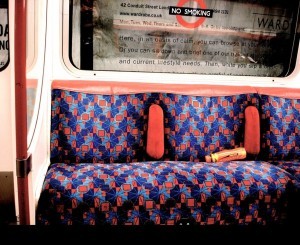 Ever eaten on the tube, sat with your legs too far apart or broken any other unwritten rule of public transport? Your picture might have made it onto one of the increasingly common Twitter or Facebook accounts set up for 'stranger shaming'.

For the uninitiated, 'stranger shaming' is when someone takes a photo of you without your consent or knowledge and uploads it to a social media account for the purposes of mockery. Sophie Wilkinson recently found herself on the wrong end of several hundred comments berating her for having the temerity to eat a salad on the Metropolitan Line. A quick look through similar stranger shaming Twitter accounts (we're not naming them, you can find your own if that's your bag) in the rush hour shows a casual willingness for people to take easily identifiable photos of total strangers accompanied by abuse and piss-taking.

While it's not illegal to take photos of random strangers, it's treading a fine line between harmless and harassment, especially in an age when every other person in possession of a keyboard thinks they're MI5 and starts trying to identify that random stranger. Fans of the genre argue that if someone has their feet on a seat or a badly-positioned rucksack, they deserve to be called a cunt by 700 people on Facebook. Wilkinson disagrees, saying in her blog post:

"There are a plethora of unofficial codes of conduct that people are encouraged to adhere to on the tube – no running down the up escalators, don’t put your feet on the seat, stand up for pregnant women/old people. None of these are enshrined in law, they just come as part of not being a dick – so I’d sort of like to see, ‘Ask your subject before you photograph them’ up there, too"

Wilkinson also contacted TfL’s Director of Enforcement and On-Street Operations, Steve Burton to ask about their stance on stranger shaming:

"If someone doesn’t want their photo taken it is obviously inappropriate to do so. If any customer has concerns about such behaviour, believing there may be a sinister motive, they are advised to speak to our staff or the BTP."

Which brings us neatly on to Project Guardian, the initiative involving the British Transport Police (BTP), Transport for London (TfL), the Metropolitan Police and City of London Police. Taking a photo of that woman asleep on the train with her knickers showing might just get you more than five minutes of LOLs on Facebook. A relative of one of Londonist's contributors witnessed exactly this and the unlucky camera-phone wielder found himself arrested at his destination.

Travelling on public transport with the hell that is other people can be nerve-frayingly infuriating but taking unwanted pictures of your fellow commuters doesn't elevate you above them. In short, don't be a dick.

Photo by chutney bannister in the Londonist Flickr pool.