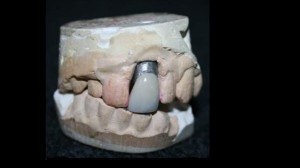 He may not have had a wooden heart, but Elvis Presley did have a porcelain tooth. And it's coming to London in a bid to raise awareness of oral cancer.

The King's Crown, if you will, was created in the 1970's by Presley's dentist Henry J Weiss. It was bought at auction a couple of years ago for £6,500 by Canadian dentist Michael Zuk. According to the BBC, Zuk is a 'self-confessed tooth-collection obsessive', with ambitions to clone John Lennon from dental DNA. Actually, the more we read this, the more we think that the BBC is leaking a back-story to a future Doctor Who episode. But moving on...

The tooth, encased in a mould of the singer's mouth, is set to tour the country over the next two months. It comes to London on 22 May, where you can view the curiosity at Brightside Dental, the 'home of calm and gentle dentistry' in Bounds Green. The main attraction will be supplemented with music, Elvis impersonations and — on a more serious note — free mouth cancer screenings.