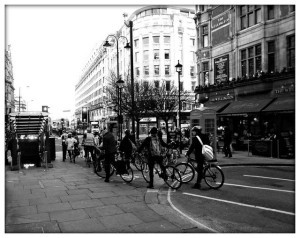 A cyclist died after an apparent hit and run incident in Clapham last week. Police say a black BMW 5 series with tinted windows failed to stop at the scene at 10.25am on Friday, and carried on north up Clapham Manor Street. The 26 year old male cyclist suffered head injuries and died on Saturday. He is the fourth cyclist to die in London this year, and follows a death at Ludgate Circus last week.

On Monday night a man died after being hit by a car outside Bow Road police station at 9.45pm. The driver stopped and was arrested on suspicion of causing death by careless driving.

A number of inquests into last autumn's series of cycling deaths will take place this week; the first, into the death of Francis Golding at the junction of Southampton Row and Theobalds Road, happened yesterday. Mr Golding was hit by a coach that was turning left and indicating. A witness, another cyclist, said "I don't think he was paying enough attention for two seconds of his journey and he really paid the consequence".

Coroner Mary Hassell — who was extremely critical of cycle superhighways during inquests into the deaths of Brian Dorling and Philippine De Gerin-Ricard — summed up the incident by saying of Mr Golding "he just didn't see [the coach]". But she castigated Camden Council for a "lack of urgency" in improving the junction since his death in November 2013. The junction in Holborn has seen 77 collisions in the last 10 years, 29 involving cyclists and three which were fatal.