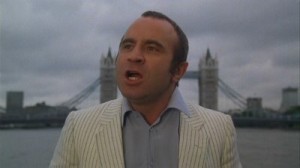 Actor Bob Hoskins has died in hospital of pneumonia, aged 71. The much-loved actor was brought up in Finsbury Park, and often played the loveable Cockney rogue.

The Long Good Friday (pictured, 1979) sees Hoskins on top form as a dodgy developer looking to invest in the then-derelict Docklands as a venue for the Olympic Games. Londonist readers voted it the best London film of all time back in 2010, and we urge you to seek it out if you've never seen it. His other London films include Mona Lisa (1986), which pairs him with Michael Caine in a seedy tale set in the now-vanished King's Cross red light district. More recently, he played a notable part in Made In Dagenham. The Telegraph has more background on his career, and a roundup of early tributes.