Six Reasons NOT To Rebuild The Euston Arch 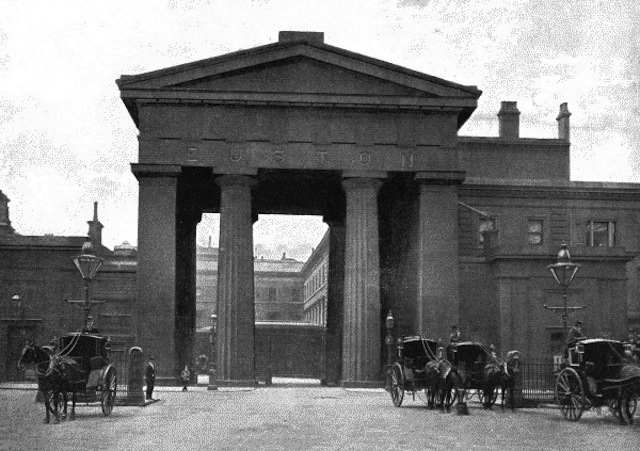 One recent High Speed 2 report included a headline-grabbing detail: a rebuilt Euston Arch. The early-Victorian landmark was famously destroyed in the 1960s despite a fierce campaign from national treasures like John Betjeman. Now it could be rebuilt, using the original stones.

Press and public attention was wholly positive, with nobody stopping to question whether there's any merit in spending money on resurrecting the arch. Just to be contrary iconoclasts, here are some reasons to leave it well alone.

Just look at it. Brutish and overbearing, with chunky entablature that was out-moded in Roman times. It can't even be bothered to present a full set of matching columns to the world. Loser.

It's not even an arch

Our dictionary defines an arch as a 'curved supporting structure'. Is it curved? No. Is it supporting anything? Yes, but only its own preposterous bulk.

Was it ever really liked?

No one will give two monkeys after the fuss dies down

We've been here before. Remember Temple Bar? It was absent from the City for well over a century, before it was rebuilt to great acclaim in Paternoster Square in 2004. We suspect that the vast majority who now pass through it neither notice nor care.

It's a smoke screen

Hey everybody, good news. We're going to undo the nefarious work of evil 1960's planners and rebuild this much-loved icon. While you're all focusing on that bauble, we need to expand the station, so we'll go right ahead and demolish lots of other stuff. Like, say, the beautiful disused tube station on Melton Street, which is so handsome it makes these construction workers dance for joy.

Mock-ups of the reinstalled arch show it squatting between the two lodge buildings on Euston Road. The one to the west currently houses the Euston Tap, which you lot voted the best pub in Euston. Rebuilding the arch would surely require it to close, at least during construction. And with the doors facing in towards the arch, it'd have to be substantially remodelled afterwards to remain as a pub.

So, anyone want to write a riposte?