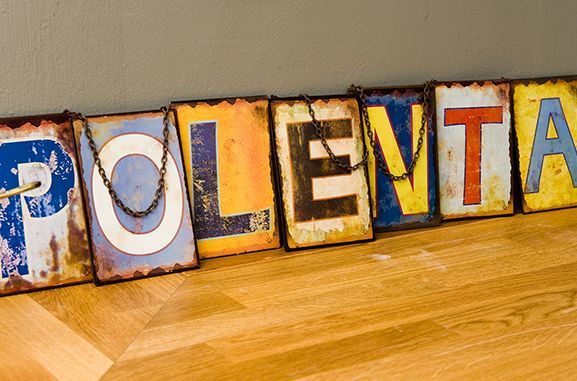 From burger, hotdog or chicken-only joints to mozzarella bars via an all-pork eatery, one-item wonders are proving enduringly popular on the London restaurant scene.

The single foodstuff at the heart of this venue is a less obvious choice for a dedicated menu than others, though. As the name hints, it’s polenta which is the focus of every single dish at this new Soho eatery.

Polenta is used almost exclusively in Italian cooking (though there are similar things in other parts of the world, such as grits in America), and it’s really just another term for cornmeal. From a culinary perspective, it can be used in three main ways: boiled and made into a thick, porridge-like dish that vaguely resembles mash; prepared in the same way but made firmer and then grilled or fried so as to make a kind of fritter; or used as an ingredient in baked goods. You can find it in all its forms at La Polenteria.

From a nutritional point-of-view, polenta is also quite unique, and La Polenteria is keen to shout about the fact that it’s vegan-friendly, gluten-free, high in fibre and protein, low in fat and full of vitamins A and C.

In case you should forget any of that, it’s written on the walls at this teeny  Old Compton Street eatery, while a graphic explaining just how the stuff is grown, picked and cooked takes up the rest of the wallspace, and dedicated polenta pans hang all over the shop, even being cleverly used as door handles.

Dishes of soft polenta (the mash-like one) topped with saucy things such as ragu, goulash, caponata or cheese are the main attraction, while some salads and lunchtime-oriented sandwiches are on hand as extras. Over a couple of visits we tasted a wild boar ragu option, another of Tuscany sausages with borlotti beans, and one topped simply with wild mushrooms, from the vegan section of the menu. They range from £7 to  £12 in price.

It’s the latter which was a surprise winner: the mushrooms burst with deep, earthy flavours, were lightened by a twang of garlic, and made almost silken through some careful cooking in a liberal amount of olive oil. We’d have added a touch more salt, but will concede that this was on the table waiting for us. Our ragu, on the other hand, could have benefitted from longer cooking: it was tasty, but not unctuous, and the meat still felt like a separate entity to the sauce. The Tuscan number was heartier with a touch of fennel in the sausages adding much-needed vibrancy.

The all-important polenta was made thick and dense to the point of actually solidifying on our plate as we ate. It was coarse, with the grains very much detectable, and tasted strongly of the corn from which it came. It could fare well as a slightly bland comfort food, so long as that was your thing. Personally, we weren’t convinced.

Francesco Mazzei’s supreme City Italian L’anima is among the places that we’ve sampled polenta in London before, and we recall this dish as an indulgently sloppy number made rich through copious amounts of olive oil and parmesan cheese. Glance at the pages of a Jamie Oliver cookbook, and he’ll reiterate the same: polenta can be brilliant, but it needs the flavour to be put in there somehow. Think about it in British terms: would you prefer your mash with or without butter?

Noting that most of the occupied tables in the half-full restaurant were taken by Italians, we took one along for some feedback. He confirmed that the polenta sampled was indeed similar to how it would traditionally have been served up at home; what he didn’t say was that this was a great thing. Polenta was typically widely eaten as peasant food due to its cheapness and availability; when we’re dining out in Soho, peasant food isn’t what we’d ideally like to feel like we’re eating. Even if it is pretty cheap.

For many of the Italians eating here, it may offer a nostalgic taste of home; for polenta obsessives, it may be heaven. For anyone else, London has far better Italian restaurants with far less limited menus for us to be able to recommend this one. If only the mains had been as gooey, rich and ridiculously over-indulgent as our Ferrero Rocher cupcake ‘dessert’ (baked with polenta, obviously), it could have been a very different story.