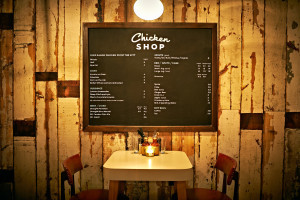 Swish restaurant and hotel group Soho House couldn’t be much more at the opposite end of the spectrum to Chicken Cottage, better known for international private members’ clubs and upmarket eateries such as Cecconi’s, High Road Brasserie and Dean Street Townhouse. But in recent years they’ve spotted a trend and gone a bit mad for fast-food that they can roll-out. They were onto a winner with hip Pizza East in Shoreditch (and now also Kentish Town and Portobello) and followed up with trashy burger bar Dirty Burger and Chicken Shop in Kentish Town, both since having expanded south of the river to Vauxhall and Tooting respectively.

Tooting wouldn’t have struck us as the most obvious location for the next Chicken Shop (let’s face it,  there’s already a LOT of chicken shops in Tooting), and its spot past the main drag of shops and restaurants on a mainly residential street feels downright strange. It’s near-empty on our Friday night visit so perhaps the locals agree, though we’re told there have been queues on other nights.

Sitting at a bar circling the small kitchen, there’s plenty of theatre in the slowly rotating skewered chickens and marinade-rubbing action in front of us, but it’s another customer that grabs our attention. Clearly having had a few drinks, and stumbling a little when walking in, a young man is quickly and aggressively told by the staff that he can eat if he wants but he won’t be served any alcohol. He hadn’t even tried to order any, and was far from wasted. Of course, a restaurant must be responsible, but surely if you’re dressing yourself up as a takeaway chicken shop you have to be prepared for what comes with it.

On with the food. It’s all about rotisserie chicken here, so don’t expect anything other than their curly fries to be fried. In fact, don’t expect anything else at all. Quarter (£4), half (£8) or whole (£14.50) chickens are available and all come doused in Chicken Shop’s signature paprika, garlic and lemon rub which is applied before being grilled. The birds are first poached, which will explain the impressively moist meat, and the skin has a pleasantly smoky, charred flavour though there isn’t a lot in the way of actual chicken taste - perhaps this has been surrendered in the poaching.

The chips are suitably crisp and fluffy (though we did baulk at the £4 charge), the chicken good enough to make us lick our fingers, and a side-order of corn-on-the-cob a nice touch. For us, there’s just something not quite right. The new, sterile, perfectly polished surrounds feel false. It feels a little like a posh restaurant has thrown on a chicken shop costume to go to a Halloween party.

If you’re in the area and in need of a feed, you’ll enjoy what Chicken Shop has to offer, but for us we find it lacked spirit. Many people will bemoan the gastropub as ripping the heart out of our atmospheric old boozers; while we’re at it, let’s not forget the charm of a shabby takeaway, either.