Won't Somebody Think Of The Pedestrians?

By BethPH Last edited 103 months ago
BethPH Won't Somebody Think Of The Pedestrians? 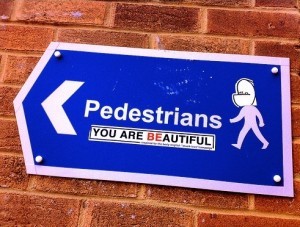 Last year, pedestrians accounted for 51% of all fatalities and 37% of all serious injuries on London's roads.

That's more than double the number of cyclists, motorcyclists or car occupants killed or injured in the same period. So where are the outrage, the protests and the headlines? Where cyclists have found their political voice and every tragic death is marked by a front page story, a ghost bike and calls for better cycling provision, pedestrian protests have yet to make their mark.

The Transport Research Laboratory (TRL) very helpfully produced a report last year on pedestrian injuries and fatalities, so we decided to take a closer look. While the TRL report concentrates on the period between 2006 and 2010 and uses 200 police files on fatalities, the reasons behind the deaths are probably not too far removed from 2012's 51%. The eight commonest categories of pedestrian fatality break down like this:

So why don't we see the same high-profile reporting on pedestrian deaths? There are probably several reasons for this, a lot of them around public perception rather than cold hard facts.

Cyclists and motorists both belong to fairly entrenched camps, their perception of each other stereotyped by a lycra-clad eco-warrior at one end and Jeremy Clarkson at the other. It's a war out there and while both groups are busy arguing on LBC 97.3 about who jumps the most red lights, attention is taken away from the comprehensive cycling infrastructure that's not being built. Which brings us on to another reason.

To ease the strain on London's creaking roads and public transport system, the powers-that-be have been actively encouraging us all to get on our bikes and cycle to work. Aside from making sure people can cross a road without getting run over (unless it's the A12) pedestrians can and have been muddling along as they always did. So there's no big infrastructure to boast about and, let's face it, no-one invites a celeb or issues a press release to open a new footpath.

And to play devil's advocate for a moment, from a statistical point of view, nearly everyone in London is a pedestrian at some point during the day, whereas there are fewer cyclists, so the fatalities are probably proportionately higher in the cyclist camp. Identifying yourself as a pedestrian just means walking to the nearest sandwich shop at lunchtime. Identifying yourself as a cyclist puts you into a whole separate transport category.

Then we come to the blame game. Those drunk pedestrians who accounted for 23% of fatalities — was it their fault they got run over? After all, if they hadn't been drunk it wouldn't have happened, surely? Not to mention those people recklessly dashing across the road without using a pedestrian crossing. But in the case of many of the cycling deaths, the perception is that they did nothing to contribute to their own accident. In fact, the biggest crime that most of the cyclists who have died recently appear to have committed is to position their bike on the left side of a vehicle at a junction. Ill-advised, maybe, but hardly reckless.

Last year, the Guardian asserted that it was more dangerous, mile for mile, to be a pedestrian than a cyclist. Full Fact decided to look into this and came to the conclusion that while pedestrian fatalities per 1 billion trips were higher than those of cycling, it wasn't all that helpful as they didn't have data on the distance of average cycle journeys vs walking. Ultimately, "the fatality rate alone is slightly higher for pedestrians than for cyclists, suggesting the conclusion depends on what measures you choose to use when measuring 'danger'."

But leaving aside the statistics, at the moment, the voice of the cyclist is currently louder than that of the pedestrian and whosoever shouts the loudest gets the most column inches. When we write articles on protests and demands for better footpaths, we'll know that pedestrians have found their political voice too.

Photo by chutney bannister in the Londonist Flickr pool.