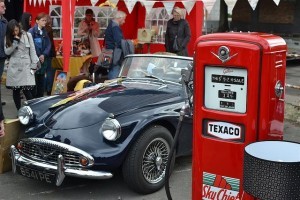 Deaths from particulate air pollution are rising in about 50% of London's boroughs, new figures show.

Data released by Public Health England last week calculated the proportion of deaths that can be attributed to small particles in the air (PM2.5) in 2011 compared to 2010. Particles smaller than 10 micrometers (PM10) cause problems for health as they get into our airways and settle in the lungs. Barnet, Brent, Camden, Ealing, Enfield, Hackney, Haringey, Harrow, Havering, Hillingdon, Hounslow, Islington, Redbridge, Waltham Forest and Westminster all experienced rises. Tower Hamlets, the City of London and Kensington and Chelsea shouldn't feel smug however; they (along with Islington and Westminster) had death rates caused by air pollution of above 8%.

London's death rate from particulate air pollution is higher than England's in general (that's what we get for living in a major city rather than rolling hills), but rates in the country as a whole are falling, so there are concerns that deaths in half of London are going the wrong way. Dr Benjamin Barratt of Kings College explained to us last year that diesel is a big contributor to particulate air pollution; in London, cars registered as using diesel rose from 6.9% in 2000 to 21.7% in 2011.

The Mayor must act now to bring effective measures to protect Londoners from excessive, dangerous and illegal levels of vehicular pollution. We need more electric vehicles, especially buses and vans, but the simplest solution is to reduce the total amount of traffic on our roads. The two key steps the Mayor needs to take to make this happen are to lower fares and to create a safe space for people to cycle.

We all have to die of something, but wouldn't it be nice if where we lived didn't contribute to as many of us dying a wheezing, hacking death?

See also: London’s Air Quality Is Rubbish, But What Can Be Done?