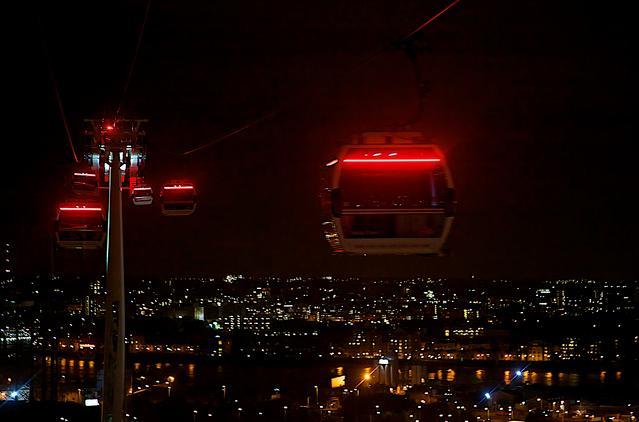 Ridership figures for the cable car have never exactly been great, but recent figures show the dangleway hitting new lows.

Both Mayorwatch and Boriswatch posted analysis of passenger numbers yesterday. Why now? Well, there was an enormous drop-off between last year's autumn half-term week (70,704) and this year's (27,090), but there is the bad weather to take into consideration. But mainly it's because we're far enough past the parallel Olympics and Paralympics period to make a reasonable comparison year-on-year. In other words, this is the first time we can compare like with like, without 2012's passenger figures being distorted by Games visitors travelling between the O2 and ExCel and the general tourism boost.

Last week's Londonist Out Loud podcast visited the Emirates Air Line, to give it its Sunday name. It was recorded at the end of July, and we gave weekly passenger numbers as around 30,000-40,000. If we were recording it now, we'd have to give them as more like 20,000-30,000 – the last time more than 30,000 people went on the cable car over seven days was the week ending 7 September; if we look back at 2012, the first week passengers dipped below 30,000 was the week ending 1 December. Boriswatch has created a useful graphic that plots usage from both years. 2013 is well down.

The reason? Well, as we discovered on our visit, the cable car is an enjoyable enough trip but once you've done it, you've done it. Unless you have a penchant for cable cars / really enjoy views of the docks and City airport / regularly travel between those two exact points, there's no reason to use it. Travel is faster and cheaper using the DLR and tube (and you have to walk at least five minutes at the Greenwich end to link up with other transport). Mayorwatch highlights a survey that shows 43% of users thinking the same thing. It's a novelty, and the novelty seems to be wearing off.

Options for TfL include bringing the cable car into the travelcard and Oyster PAYG capping, or a radical idea from Assembly Member Caroline Pidgeon of handing it over to be run privately as a tourist attraction. There were rumours earlier in the year of it losing money, and with paying passenger numbers this low it won't be recouping costs any time soon.

Photo by David Hardman from the Londonist Flickr pool