Note: we've excluded any events that had already sold out at the time of original publication (11 October). Please let us know about any events we've missed, and we'll add them to this growing article.

A Danse Macabre, 25 and 26 October
The Last Tuesday Society are an old hand at playful meddlings around the subject of death. For Halloween, they've put together 'two Halloween balls of the utmost magnificence'. And they're not kidding. Ten stages, a full symphony orchestra and 200 performers share the bill with wiked witches, a trans-Siberian marching band and the usual unusuals you expect from the Last Tuesday folks. And it's in the abandoned Coronet picture palace near Waterloo. Dress code: the beautiful and the damned. £25, prebook, 9pm-4am

Pop Up Ping Pong Zombie Shelter, 26 October
With sliders and cronuts on the menu, this pop-up ping-pong zombie party on Kings Road sounds like it's trying to cram every possible events fad into one venue. The premise is simple: a zombie army has descended on London, so you and your mates are taking shelter in this party till it all blows over. Along with the diversions mentioned above, you can also expect DJs, beer pong, cocktails and fancy dress. We predict: ping-pong balls that look like eyeballs. £10, prebook, 6.30pm-1am

“Haunted House of Horrible!” Halloween Party, 26 October
Masters of cheese Club De Fromage are offering two rooms of Halloween pop and indie classics in a suitably decked out O2 Academy Islington. There will be coffins, cobwebs, apple bobbing and fancy dress prizes. You can even precede your partying with a screening of Scream, if you really want to go the whole hog. £10-£15, prebook, from 7pm

Halloween Party at The Ship, 26 October
The Kennington pub (one of the best in the area according to our readers) holds its Halloween bash with themed cocktails and prizes for most creative costume or special effects make up. Music comes from Didjitalis. Free, just turn up, from 8pm

ALAWEEN Zombie Apocalypse Indoor Festival, 26 October
Eight stages, a cinema and a cocktail bar? Underground electronic music, promenade theatre, installation art, crowd participation and audio visual spectaculars? Buried in the vaults beneath Waterloo? This sounds like one of the bigger, brasher parties in a busy Halloween line-up. The punning title, in case you're wondering, is a play on ALAN, the well-known organisers of parties, who are also behind this event. £15/£20/£25, prebook, 8pm-4am

Boxpark Party, 31 October
The Shoreditch shipping-container mall gets creepy, with cobwebs and skeletons and stuff. DJs soundtrack the party, with a screening of Day of the Dead on the upper deck. Also expect ghost story telling, themed food and drink, and face/talon painting. Prize for best costume. Free, just turn up, 6-9pm

The Musical Bingo Halloween Ball, 31 October
Like normal bingo, but with tunes. And games. And DJs. And, this time, spooky fancy dress. £8, prebook, 7-11pm

Welcome To The Funhouse, 31 October
The Book Club's Halloween bash is styled around a sinister funfair with plenty of clowns, conjurers and circus performers to freak you out. A hall-of-mirrors, wretched face painting and DJs also await. £5, prebook, 8pm-2am

Zombie Masters From Another World, 2 November
The Thinking Bob events team have put together a street game in which you have to solve intergalactic mysteries involving aliens and zombies — that ever-potent combination. The ticket includes free entry to the Halloween Experiment party at The Blueberry Bar, too. £10/£25, prebook, 5-8pm, afterparty 8pm-3am 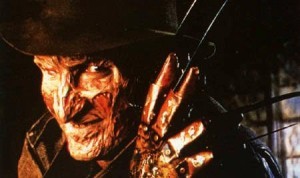 Halloween Movie Mash-Up Weekend, 25-27 October
Screenings of A Nightmare on Elm Street, The Rocky Horror Picture Show and Halloween at the Portobello Pop-Up Cinema (3 Acklam Road) are accompanied by Halloween activities such as pumpkin carving, apple bobbing and maybe dressing up a bit. £5.50, prebook, 6pm

John Carpenter's The Thing, 26 October
Antarctica, 1982, and a shape-shifting monster is picking off the inhabitants of a research station who, despite their scientific training, can't come up with any better coinage than 'The Thing'. Blame Kurt Russell. A special Halloween screening at Union Chapel, Islington raises money for the Organ Restoration Project (that's of the musical variety, not alien-nibbled innards). £14.90, prebook, 6.30pm

The Phantom of the Opera, 26 October
A screening of the silent black & white version with large church organ accompaniment at St John's church Notting Hill. A talk precedes the film. £15.95, prebook, 6.30pm

Asylum: 2.8 Hours Later, 17 October-2 November
Run around town avoiding zombies, then make your way to the zombie disco. This highly popular immersive theatre-game is selling out fast, but tickets are still available on some nights at the time of writing. £40/£60, prebook, start times vary

Strange Factories, 26 October
We're not quite sure we understand the blurb for this one (perhaps that's the point), but it sounds like you'll be watching a  macabre film Strange Factories, which eventually unravels with the characters coming to life around you in a kind of immersive theatrical way. It takes place over 13 nights at the Cinema Museum in Elephant and Castle. £28, prebook, 7pm 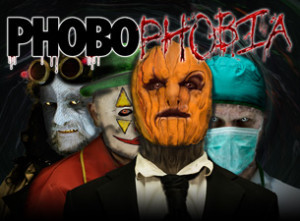 Location Location, 31 October-2 November
A gruesomely theatrical Halloween experience from the International Society of Communication and Drama, with live performance, projections, opera and DJs from Reel Rebels Radio. Set in Stour Space and the surrounding Hackney Wick streets, you pose as a property buyer interested in the area, but are soon haunted by the ghosts of former residents. Post-event party included. £12, prebook, 8.30pm-1am (31st/1st), 4.30-6pm (2nd, a family-friendly day)

Warehouse Werewolves, 2 November
The team behind Ginglik lead you through the eerie streets, canals and warehouses of Hackney Wick for an all-night immersive multimedia night of thrills and kills. £35/£25, prebook, 7pm-6am

Boo at the Zoo, 26 October-3 November
ZSL London Zoo gets spooky for half term with creepy creatures, crafts and other entertainment. Free with standard ticket price, prebook or just turn up, times vary

Greenwich Market, 30 October
A day of activities for children, including costume workshops, face painting, pumpkin contest and best-dressed dog show. Meanwhile, adults can peruse the stalls and vote for the scariest stall-holder. Free, just turn up, all day

Halloween Disco Skate, 31 October
Lee Valley Ice Centre runs a Halloween-themed skating evening. It's in the evening, but looks like it's aimed at families. £6, just turn up, 8.30-10.30pm

Nosferatu, 31 October-2 November
The Unicorn Theatre puts on a family-friendly adaptation of the classic vampire story, with spooky decorations and activities. There's also a party on 31 October (4.30pm). £10-£16, prebook, 2pm/6pm

Ghosts, Zombies and Vampires, 26 October
A series of talks on the origins of supernatural myths, from a skeptical, enquiring viewpoint, at Conway Hall. £10, prebook, 11am-3.30pm

Ghosts and Monsters of Smithfield, 26 October
A tour of the area's more horrific associations, including Bleeding Heart Yard, with Scott Wood of the London Fortean Society. £5, prebook, 6.30pm

Haunted Parks and Palaces, 28 October
Another walk from the hard-working Scott Wood, as he takes you on a tour of haunted trees and forgotten plague pits in the West End. £5, prebook, 6.30pm

Southwark Halloween Walks, 28-31 October
Join local legend John Constable for a tour of Southwark and Bankside's ghosts and folklore, including a short vigil outside the Crossbones graveyard, which John has done so much to rescue from obscurity. £10, prebook, 7pm

Things That Go Bump In High Barnet, 28 October-2 November
A special ghost walk through High Barnet and Monken Hadley, said to be the second most haunted village in England. Hear tales of witchcraft and murder. Learn about the fate of the ghostly dead of the Battle of Barnet. See the pirate's grave. £8, prebook, 7.30pm

Hunterian Halloween Late View, 30 October
The Hunterian Museum of anatomy in Lincoln's Inn Fields can be a disturbing place at any time of year. For Halloween, it's staying open late so you can learn about the anatomy of a hanging and discover how the dead ‘rising’ wasn’t always so uncommon in previous centuries. Finally, create your own anatomical souvenir at the ‘pickle a part’ workshop (bring your own jam jar and lid). Free (donations welcome), just turn up, 6-9pm

Unbeliever's Ghost Walk, 30 October
Why should people who believe in ghosts have all the fun? Take a sceptical tour of the Farringdon and Clerkenwell area, with the London Fortean Society's Scott Wood. £5, prebook, 6.30pm

Fibbing Phantoms, 30 October
From the people who brought you London Liars' Tours, Chris Roberts presents tales of deceitful duppies and slippery spirits along the banks of the Thames. £5, prebook, 7pm.

Doors of Doom, 31 October
Well, this is a novel one. Kigu, who make animal onesies, are going to hide lots of doors around east London. You have to track the doors down, knock on them, receive a trick or a treat, then solve clues to find the after-event party. £5, prebook, time tbc

London Walking Tours Halloween Special, 31 October
Sean Mitchell presents the ghosts and goriness of the Thames and its bridges, taking in the Tower of London. £5, prebook, 7pm

Halloween at the Grant Museum, 31 October
A special late night opening in which to surround yourself with dead animals in jars and other creepy objects, all specially labelled for Halloween. £5, just turn up, 6.30-9pm

Night Safari, 31 October
The Natural History Museum's ticketed late opening offers talks on the 'scariest monsters of all time'. Then explore the galleries with a glass of wine, or perhaps Halloween punch. £28, prebook, 7-10pm 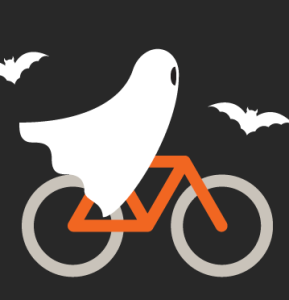 Halloween Cycle Ride, 31 October
Bikeminded, Kensington and Chelsea's cycling initiative, hosts another spooky, spokey bike tour around the borough. Titled The Ballard of Lord Stanley Oberwain, you'll be transported back to the end of the 19th century, where ghastly secrets are tormenting a wealthy nobleman. The immersive theatre unfolds as you cycle round the streets. Period dress encouraged. £5/£7, prebook, 7-9pm

London Fortean Society, 31 October
The Forteans meet in The Bell, Spitalfields every month to discuss the strange, but for Halloween they've put on a set of ghostly talks. Learn about poltergeist hecklers and listen to ghostly folk songs and tales. £3, just turn up, 8pm

Twitter Tour of the Tower of London, 31 October
The Tower will be running a special virtual tour of its 10 (supposedly) most haunted spots, using social media to convey images and video. Tune in via Facebook and Twitter from 8pm

Sleepover at Mrs Lovett's Pie Shop, various dates
The London Dungeon and Wimdu have forged an unlikely alliance to offer guests a sleepover in the dungeon's macabre pie shop, straight out of Sweeney Todd. Guests will also be treated to pie and mash in the Ten Bells pub, a tour of the London Dungeon, and a bedtime story from Mrs L, before bedding down on your horsehair mattress. £86, prebook, all night

KaraUke's Halloween Fancy Dress Party, 17 October
Sing along to a ukulele band in the Royal George while dressed up as a corpse. Light entertainment has finally reached its noble pinnacle. Free, just turn up, 7pm

Scream Printing, 29 and 31 October
Haha, it's like 'screen printing', but they said 'scream printing' because it's Halloween. Haha. Learn to screen print with glow-in-the-dark ink in a pair of workshops at Print Club in Dalston. Spooky costumes are mandatory. £55, prebook, 11am-4pm

Flirt n'Dessert Dead Famous, 29 October
A singles night with a difference at Shoreditch's The Book Club. Turn up dressed as a dead celebrity of your choosing, then flirt and mingle with other dead celebrities. £12, prebook, 7-12pm

DCR Presents: The Haunting, 31 October
A bit of everything at Red Gallery, on Rivington Street, as DCR presents a film screening, 'photographic flagellation of the macabre and uncanny', sound installations, DJs and more. £5.50, prebook, 7pm-2am

Curious note on spelling. We only found one venue that still puts the apostrophe in Hallowe'en, and that was foody poshters Fortnum and Mason.