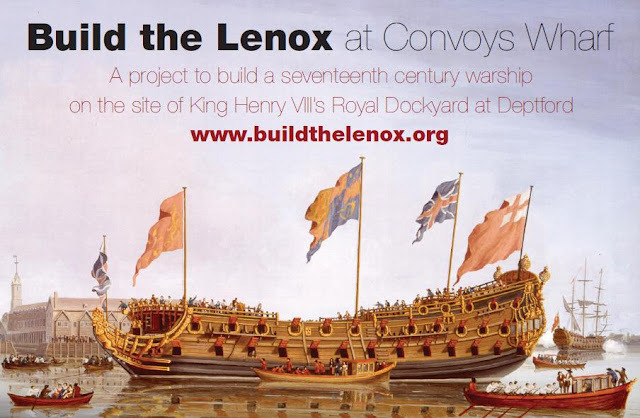 Enthusiasts in Deptford are keen to rebuild the Lenox, the first warship constructed in a grand shipbuilding project of Charles II. The replica ship would form the centrepiece of the new Convoys Wharf residential scheme and restore maritime pride to this forgotten centre of industry.

Deptford played a crucial role in the history of London and our nation. Some of the greatest ships from the 16th to the 19th Centuries were built or refitted in its shipyards, including vessels used by Cook and Nelson. Bar a few sculptural trinkets, this history goes largely uncelebrated when compared to the nautical exuberance of neighbouring Greenwich.

The Build the Lenox group seeks to reverse this by creating the 52-metre-long vessel using traditional means. The construction process, which would take around eight years, would become an attraction in its own right, with visitors watching skilled joiners and trainees assembling the hull using both historical and modern technology. The group are now seeking funding, and attempting to convince the developer of the project's worth.

The Convoys Wharf scheme will provide 3,500 new homes, a new school and cultural spaces around the river side. As architectural critic Kieran Long notes, the proposal has much to recommend it over similar developments. Yet locals have several concerns with the plans, which include little acknowledgement of the site's historical significance, despite the fact that many archaeological structures remain in place. Rebuilding the Lenox sounds, in principle, like an imaginative way to not only revel in that history, but also add value and public interest to the development.

If you'd like to learn more about the project, and perhaps lend your support, visit the Build the Lenox website.

Thanks to Transpontine for the tip-off.