The Day Peter Pan Was Tarred And Feathered 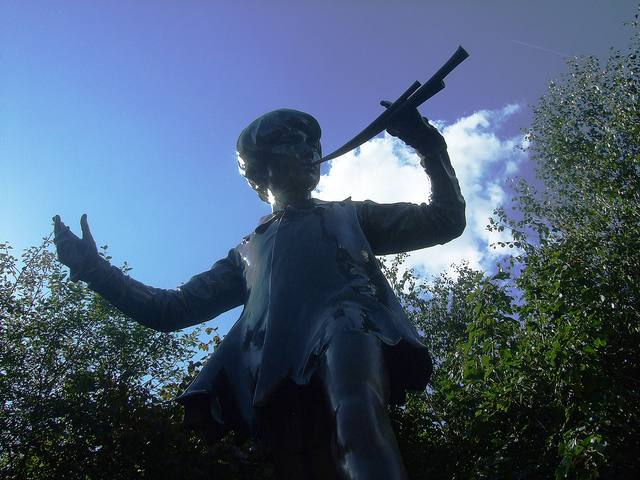 Kensington Gardens was not a happy place on 22 August 1928. A newspaper account of the time describes "Children, with their lips pouting sadly and with tears in their eyes". The object of their lamentation was the much-cherished statue of Peter Pan. Overnight, someone had poured a pail of tar over the bronze boy's head, then whimsically garnished it with cushion feathers.

The press revelled in the 'outrage', gathering broken-hearted comments and mawkish reactions from a devastated public.

"Poor Peter," one little fair-haired child exclaimed, "all in the dark, where he can't see the birds, and the water and everything".

"If I knew who had done it, I would smack them," shouted a little boy in a sailor suit, holding a model yacht in his arms.

"Where are my bunny rabbits and the little mice!" a tiny girl demanded [referring to the animals decorating the base]. "I always come and say good morning to them. May I make sure they're still there? I want to tell them I'll be back tomorrow."

Peter's "grotesque appearance" was soon shrouded from public gaze by a tarpaulin. Immediately, men set to work with knives, paraffin and other implements. The statue took two days to clean, and traces of the tar lingered even then. Dorothy Dickson, an actor who'd recently played Peter Pan on stage, commented: "It is the most stupid thing I have ever heard of. I cannot imagine what reason anyone could have for such a silly piece of vandalism. The only conclusion I can come to is that whoever did it must be a lunatic."

Or, as another account supposed, students. This was the golden age of rivalry between those studying at King's College and UCL. Tarring and feathering was an oft-deployed prank in the student armamentarium. An incident the year after the Peter Pan outrage saw two statues and a war memorial tarred at UCL.

But the statue in Kensington Gardens had no apparent link to either university, and August would seem an unusual time for a student jape. Another, more unlikely, theory began to emerge: artistic rivalry.

Close by, in Hyde Park, a second sculpture had been the target of vandals the year before. This was Rima, a 'jungle girl' from the novels of WH Hudson, rendered in stone by Jacob Epstein. Like Peter Pan, the sculpture depicted a celebrated 20th century fictional character. The two were often compared and contrasted. 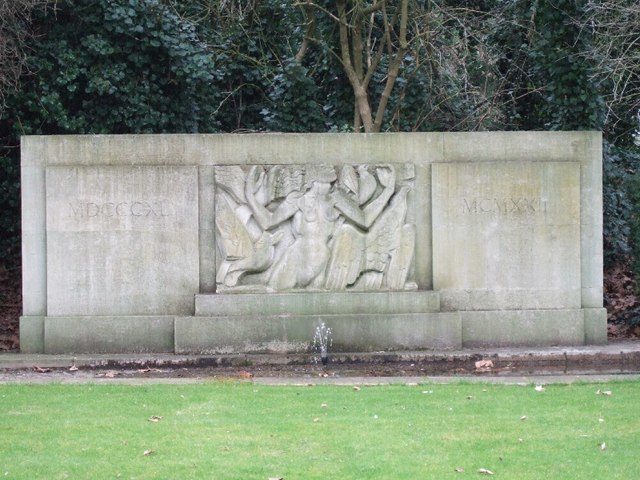 While George Frampton's Peter Pan statue was hewn and cast in a traditional style, Epstein's Rima was avant garde, showing the heroine in impressionistic form — and without any panties on, too. The piece was not popular with artistic conservatives, and (like much of Epstein's work) drew sharp criticism. 'Grotesque', 'atrocity' and 'myopic artist' are all phrases the critics bandied about. One commentator even suggested that Epstein's panel was acting as a scarecrow, driving away the birds from that part of Hyde Park.

Epstein also had his supporters. Author Holbrook Jackson was clearly in this latter camp. His opinions on the relative merits of the two sculptures could not be more clear: "The statue of Peter Pan is only tolerable for the sentimental effect it has on children who have been wrongly brought up. Rima is one of the greatest examples of the sculpture of modern times."

(Clearly not a man afraid of controversy, Jackson used the same speech to declare: "Women to-day, in spite of being unwomanly enough to have the vote, are more womanly, beautiful, and charming than they have been since the days of ancient Greece." He also declared wireless fans to be "barbarians—almost savages".)

When Rima was daubed in green paint in 1927, many saw it as a protest at the unfortunate turn that modern art was taking. And then Peter Pan was defaced. Was this a retaliation by Epstein's supporters? It seemed far-fetched, but then in October 1929, Epstein's Rima was sullied once more. This time, the naked jungle maiden was tarred and feathered, much like Peter Pan. A tar-hurling attempt on another Epstein work — Night, at 55 Broadway, was foiled a week later. ("Michael Angelo's 'David' was stoned by the populace of Florence...so I feel I am in good company", quipped the artist.)

Seemingly, London's statues were being trashed by followers of rival artistic traditions. Heath Robinson even sketched a 'machine to express criticism of statues', which parodied such vandalism, which continued round the country for the next few years. Rima, in particular, was a regular target right up to WWII. In one particularly sorry instance in 1938, and with presumably quite different motives to earlier attacks, it was tarred with a swastika and the word 'join'.

As far as we can tell, no one was ever arrested for the attack on Peter Pan, or the vandalism of other sculpture that followed. It remains a mysterious, unusual and largely forgotten chapter in the history of London's public art.

Image of Peter Pan by Tezzer57 in the Londonist Flickr pool. Image of Rima by David Smith under creative commons licence.