First Impressions Of A New Skate Park Under Hungerford Bridge 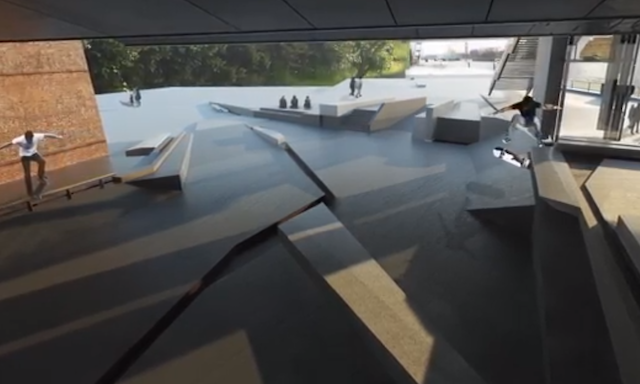 For almost 40 years, the unique slopes, perches and conformations of the Southbank Centre's undercroft have attracted generations of skateboarders and BMX riders. Earlier this year, the arts centre announced plans to redevelop the space into a new retail and dining area. The skate park would have to close, but an alternative would be found elsewhere on the riverside. Cue plenty of resentment from skaters, and anyone who happens to think that spaces of cultural importance should be cherished and preserved rather than bulldozed and reformed from scratch.

The Southbank Centre is unlikely to yield to the skaters' wishes, but it is trying to get them onside for the mooted alternative: a new skate park beneath Hungerford Bridge. The video below shows early concept designs for a space that would be bigger than the existing undercroft, and on a site also previously used by skaters. The designers are hoping to create something that's  "great for skateboarding in, but doesn't look like it's overtly designed for skateboarding in". Further, the project managers are hoping to attract skateboarders into consultation meetings to help tweak and hone the designs to meet the skaters' needs.

To many outside the argument, this might seem like a reasonable compromise. But the skaters maintain that you can't just uproot decades of accrued experience, tradition and culture. As one opponent flipped things, it'd be like demolishing the Houses of Parliament to build a skate park, then rebuilding the seat of government elsewhere, to a brand new design.

Here's a video from the skaters' point of view, courtesy of Long Live Southbank, which also has a petition going.