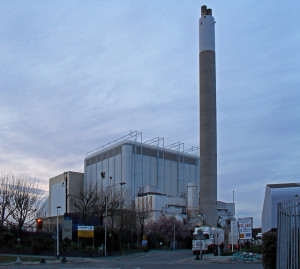 The Mayor's office has granted permission for a new incinerator to be built in Sutton. The plant will burn waste from Croydon, Kingston upon Thames, Merton and Sutton, taking it out of landfill and converting it to electricity.

We say "the Mayor's office" rather than the Mayor because, while Boris is currently in Australia kissing crocs and appearing at the Melbourne Writers Festival, he delegated the decision to his deputy Sir Edward Lister (Lister was leader of Wandsworth council for nearly 20 years but is unelected to City Hall). Which piles another controversy onto an already controversial project.

The incinerator will be built on open land, losing three hectares of a site designated important for nature conservation. The company behind the scheme, Viridor, has obtained a similar sized site to the north and has promised to secure access to the new land from Beddington Lane. This new site will be turned into a habitat suitable for wildlife, but construction will inevitably disrupt the existing ecosystem.

Another issue is that the incinerator seems to contradict the Mayor's own London plan. On page 167, talking about recovering energy from non-recyclable waste, it says:

It is envisaged the minimum greenhouse gas performance will need to achieve at least a positive carbon outcome, whereby the direct emissions from the technology are offset by emissions savings from the generation of energy in the form of heat, electricity and transport fuel. This would, for example, tend to rule out new mass burn incineration facilities of mixed waste generating electricity only, but may allow combustion of biomass waste where both heat and power generated are used.

The Sutton plant is burning mixed waste for electricity only, so would seem to be something that should be discouraged. Green Assembly Member (and new peer of the realm) Jenny Jones said:

The Mayor’s decision is an environmental disaster for south London and the recycling and composting industry. The Mayor has failed to observe his own planning and waste policies which state that incineration is the least desirable form of waste management.

A similar plant operates in Deptford, burning waste from Lewisham, Southwark and Greenwich. It was the focus of a Greenpeace action about a decade ago to protest against dioxins released into the atmosphere. Viridor is paying £35k towards additional air quality monitoring for three years, to check for dioxins and nitrogen oxide levels.