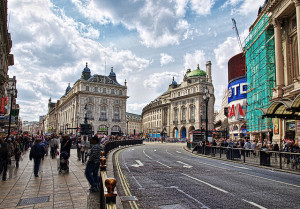 If you're looking for a pop-up shop in London, heading to the prestigious Piccadilly, home to the Queen's grocer Fortnum & Mason, might not spring to mind.

However, this summer The Crown Estate has offered PopUp Britain (the retail arm of StartUp Britain) a temporary flagship on London's Piccadilly in the recently completed St James's Gateway development. Shops in St James are some of the most sought-after in Britain, with a long waiting list for vacant properties and strict rules on which brands "fit" the street.

The PopUp Britain scheme, which aims to help the high street entrepreneurs of the future, is offering up to 60 fledgling retailers a week-long residency to sell their products in central London. The Piccadilly store is the eighth, and most high profile pop-up, and will open on 12 August for six weeks. As well as providing a vital testing ground for online retailers to sample bricks-and-mortar retailing at low risk and low cost, the scheme provides valuable marketing exposure for new brands. According to the Financial Times, one business saw its online sales increase 300% during their pop-up shop residency; another won a contract to supply John Lewis.

"Securing a store like this in St James's Piccadilly is like hitting the retail jackpot!" says StartUp Britain co-founder Emma Jones. "We expect to be inundated by applications from British start-up businesses eager to get their products onto one of the busiest shopping streets in the world."

This news comes in the same week as a London Council report found there to be 7,000 empty retail units in the capital, and warns the proportion of money spent on London's 200 high streets will have fallen by 9% from 2000 to 2014. The report estimates these 7,000 spaces are costing the capital £350m each year in lost business rates, salaries, and benefit payments, leading London boroughs to call for more powers to regulate and innovate.

The study states: "Empty shops are not only a symptom of a struggling high street, they are also a cause.

"Empty shops can cause a 'negative feedback loop' which means they discourage investment, decrease the offer on the high streets, keep consumers from visiting and contribute to a general sense of decline and neglect. High streets are social places that give a sense of belonging; their loss could lead to social problems."

Although there's controversy over whether pop-up shops are the answer to the problems on London's high streets, the exciting plans for Piccadilly certainly look positive. People interested in becoming part of the shop should apply at popupbritain.com/apply

Photo by Neil Howard via the Londonist flickrpool