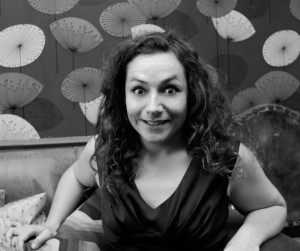 Here are a couple of choice comedy gigs for you to enjoy this week, while some fools go all the way to Edinburgh for laughs.

Sunday 28 July is the best day at the Free Fringe at The Bedford: you can see Phill Jupitus in his Porky the Poet guise, Wil Hodgson go on beautiful and lyrical flights of fancy, Sarah Campbell on fun and Jessica Fostekew (pictured) about the pain and weirdness of moving. From 2pm, free.

Living proof that ventriloquism isn't lame, Nina Conti starts a long-ish run at Soho Theatre on Monday 29 July. We've previously explained at length why it might be a good idea to catch her now, while you still can. Until 10 August, £20 / £17.50.

The whimsical Australian does her 2012 Edinburgh show for four nights at Soho Theatre from 31 July, all about her international travels. 8pm, £10 / £12.50.

Tip us off to friendly, intelligent, alternative comedy around town hello@londonist.com, read our guide to watching live comedy in London and our top 10 themed comedy nights.