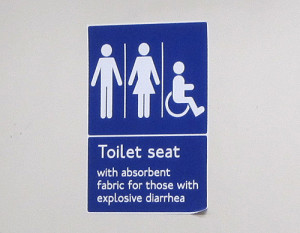 Coughs and sneezes might spread diseases, but catching flu is no more likely on the Met Line than inside a Mondeo, research suggests.

A new survey of nearly 6,000 Brits by doctors at the London School of Hygiene and Tropical Medicine found there's "absolutely no indication" that Tubes and buses are a hotbed of germs, despite what you might think.

In fact, you're slightly more likely to catch flu if you're travelling to work by car or bike rather than sharing a stuffy Tube carriage with other sick commuters or clinging onto a sweaty pole with several others inside a bus. London had a 15% lower than average number of flu cases: considering how many of us use public transport each day, the results suggest illnesses such as flu and colds just aren't spread this way.

Dr Alma Adler, a researcher in the field of infectious diseases, said the survey results "discount [an] age old myth". After assessing the School's annual Flusurvey report, she said, "Intuitively it might not be what you'd expect.

"But how often does someone actually sneeze in your face on the Tube? For a disease to be spread, being in an ill person's presence is not enough. Ideally there needs to be close contact and some sort of exchange of fluids. It's believed the droplets of flu in the air are a less effective way of spreading the disease than touching - and people don't do much face-to-face interaction on public transport." Thank god.

In other London health news, the number of measles cases in the capital has reached 103 so far this year. That's almost double the 52 cases of the disease which had been recorded by this point last year. It's now pretty clear that the total number of measles cases will far exceed last year's total of 139. The rise is being blamed on a fall in take up of the MMR vaccine. Parents are being urged to get their kids vaccinated as soon as possible if they missed out on the jab before. Public Health England are running a catch-up programme: find more details here.