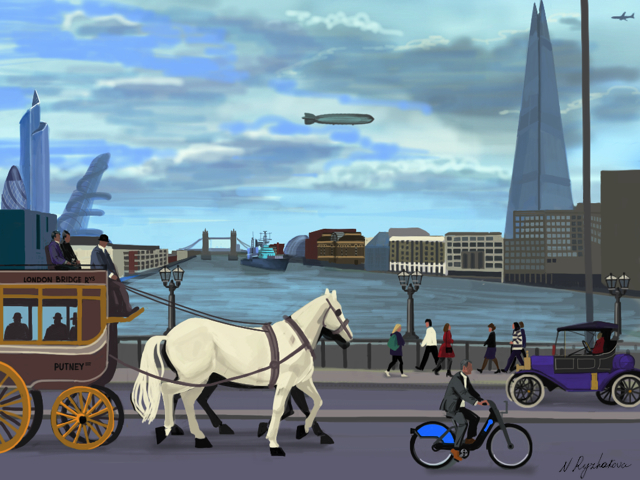 Nadja Ryzhakova sends us this colourful vision of London past, present and future, as painted on her iPad. A horse-drawn omnibus crosses London Bridge to the Surrey side, overtaken by a Boris Bike, while a vinage car passes by towards the City. Futuristic towers loom in the distance, including the Bishopsgate Tower (probably destined never to be built in this form), and another helter-skelter-style skyscraper of Nadja's own devising. Meanwhile, the More London complex (other than City Hall) seems to have reverted back to old warehousing, and London Bridge has shifted slightly upstream...plate tectonics?

View more of Nadja's iPad art on her website.

We’re still looking for further entries in the Time Travel London series. You can make your image with paint, pencils, collage, iPad…whatever you like. The only rule is that your creation should depict some aspect of London’s past alongside something from the modern (or future) city. We’ll arrange an exhibition of the best images. Thinking caps on, and send entries to matt@londonist.com.