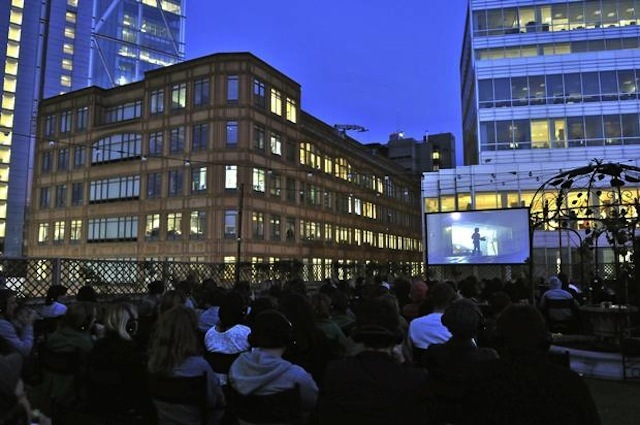 Rooftop Film Club distinguishes itself from most other outdoor screens by being, well, on a rooftop. This year, the organisation pitches up at three venues round town: the usual base on top of the Queen of Hoxton (pictured); on Peckham's busy Bussey Building; and in the refined parapets of the Kensington Roof Garden.

Much of the Shoreditch programme has already sold out. You can still grab tickets at time of writing to Fear and Loathing in Las Vegas (25 May), The Princess Bride (26 May) and Troll Hunter (17 June). There's also a special Bank Holiday screening of Purple Rain in the Leonard Street car park, where you're encouraged to sing and dance along.

The Peckham programme, beginning 4 June, has just been announced, and you should be able to snap up tickets if you're quick to see Ghostbusters, The Lost Boys, Labyrinth, Top Gun, Beasts of the Southern Wild, Clueless, The Graduate, Stand By Me, Empire Records and Trainspotting.

The Kensington Roof Gardens got in there early, with winter screenings, but promises a fresh programme to be announced shortly. It's a dazzling venue, so keep your eyes on this page.