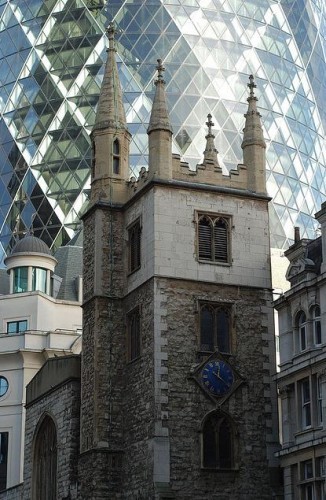 It's May Day! Time for Morris Men and girls in floaty white dresses to dance around maypoles in the villages of England. But there also used to be maypoles in central London.

St Mary-le-Strand is on the site of one. The original stood 30 metres high, according to Elizabethan chronicler John Stow, but it came down when the Puritans in Parliament banned all maypoles in 1644. A new one – over 40 metres tall this time – was erected in 1661, after the Restoration. By 1713 it had rotted so much it was removed and a new one set up opposite what is now Somerset House. (Construction on St Mary-le-Strand began in 1714.) This new maypole didn't last long and ended up being bought by Sir Isaac Newton and sent to Wanstead Park, where it supported Huygens's 37 metre-long telescope.

Cromwell's po-faced government wasn't the first set of Puritans to get at one of London's maypoles, however. St Andrew Undershaft on Leadenhall Street got its name from the large maypole that stood next to it. It had been regularly used until the 'Evil May Day' riot of 1517, when a mob attacked foreigners' houses in the City of London. After that, festivities weren't encouraged and the pole remained stored on hooks along the eaves of nearby houses. In 1549, the vicar of St Katharine Cree went to St Paul's Cross and preached a sermon against 'pagan' maypoles. The listeners were so fired up by what they heard that they pulled the maypole down, cut it into pieces and then burned it.

(This maypole's place was soon taken by a quintain at the junction of Cornhill and Leadenhall Street: this was a pole with a crossbar on the top and a bag of sand hanging from one end, to be used for jousting practice. But that's not a practical thing to have in the middle of a busy street, and it'd gone by the end of the 16th century.)

Photo of St Andrew Undershaft – incidentally, where John Stow is buried – by Doilum from the Londonist Flickr pool