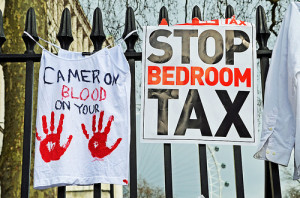 Four London boroughs saw a benefits cap put in place today ahead of a national rollout.

Couples living in Croydon, Bromley, Haringey and Enfield will see a cap of £500 per week, while single people can expect no more than £350 per week, as part of the government's drive to cut benefit payments.

So what's included in those figures? Jobseeker's allowance, housing benefit, income support and child benefit all fall under the cap but disability benefits are excluded. See the Department for Work and Pensions (DWP)'s calculator to work out how you could be affected.

According to the government, the number of people who would have been hit by the cap has fallen from 56,000 to 40,000 with 8,000 claimants finding work ahead of the cut. As with the much-publicised drop in disability claims before the controversial ATOS assessments, the implication is that claimants are inherently dishonest and have been 'scared off' by the threat of benefit caps.

Green Party London Assembly Member Darren Johnson has pointed out via Twitter that rents in the trial boroughs are far in excess of the national figures used to calculate the benefit cap, meaning London families will find themselves with a greater shortfall. Greenwich council is attempting to mitigate the impact by launching a scheme to employ local residents in full or part-time jobs at or above the London Living Wage. The New Statesman also points out in this article that a benefit cap is counter-productive and could in fact cost more than it saves.

"The benefit cap sets a clear limit for how much support the welfare state will provide — the average wage for working households. But it's also a strong incentive for people to move into work and even before the cap comes in we are seeing thousands of people seeking help and moving off benefits."

We're not quite sure exactly where all those jobs are, given how many have been cut in the last few years and with over 1,700 people applying for eight jobs at Costa Coffee. IDS recently found himself on the wrong end of a near 500,000-strong petition after rashly claiming that he could live on £53 if he needed to (he dismissed it as a stunt). The petition was delivered to the DWP last week.

Londonist also looked at the recently-introduced 'bedroom tax' and how it would affect Londoners with the social housing pool getting ever smaller, and the right-to-buy discount getting ever larger (hey, let's just exacerbate an already critical situation).

Welfare reforms have sparked protests across the UK, with thousands taking to the streets to demonstrate against the cuts. Further protests took place last Saturday ahead of the late former prime minister Margaret Thatcher's funeral.

The benefit cap will be rolled out across the country in July.