Effect Of 'Bedroom Tax' On London 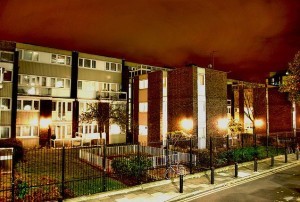 Changes to occupancy rules in social housing – known as the bedroom tax – came in yesterday. What's the impact on London?

The government has altered Housing Benefit payments so that anyone of working age deemed to be 'under occupying' social housing will have their benefits docked. It's already attracted fierce criticism because it penalises people who share care of children, adults who are disabled and expects children to share a room even if there are wide age gaps, leading to concerns about the effect on older children's education. The National Housing Federation estimates that up to 80,000 low income households in London will be affected, losing an average of £771 a year.

The idea is that households will downsize to help reduce overcrowded families elsewhere, but the main problem is a lack of available smaller properties. Excellent blog Transpontine points us at a study done last year by the Cambridge Centre for Housing and Planning Research, looking at Lee and the wider Lewisham borough. It found a four year waiting list for households wanting to move from a two bedroom to a one bedroom flat, and over 6,500 people borough-wide on the waiting list for a one bedroom flat. Also, there were no one bed privately rented properties in Lee that were affordable to people on low incomes. It's not just Lewisham; at the time of the study, over 16,000 households across London were on the social housing waiting list, 42% of whom wanted just one bedroom.

This is another way that Londoners are caught up in our city's insane housing situation. With a lack of decent, affordable housing for most of us, let alone those on minimum wage incomes or without work altogether, social housing tenants don't have the flexibility to play the sort of musical houses the policy demands. So, they're either going to end up cutting back on other bills (food, basically; we've already noted the rise in food banks) or be pushed into the more expensive private rented sector, increasing both Local Housing Allowance bills and competition for low-priced small flats – which are already like gold dust.

Alternatively, they'll become homeless and back at the responsibility of the council. We're told that a number of London councils have taken the decision that people who become homeless as a result of benefit reform won't have made themselves intentionally homeless. Intentional/unintentional homelesses affects the amount of help claimants are entitled to, which makes this an interesting, and also rather politically explosive, decision.