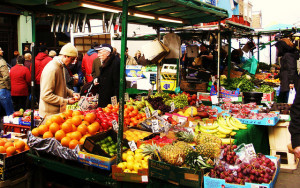 The number of food banks in London has risen from six in 2009 to 40, according to a report on food poverty from the London Assembly.

The report defines food poverty as "the inability to afford or access healthy food", either because of low income, rising prices or living in a food desert (areas where fruit and vegetables are hard to access on cost, transport or disability grounds). It's hard to know exactly how many Londoners are in food poverty but, since low income is an indicator, we'll start there: 2.1m of us live in low income households, and 592,000 of London's children live below the poverty line. We heard last December that 60% of local teachers had fed hungry pupils from their own pockets. Many councils are increasing the price of what we used to call meals on wheels. And as well as the number of food banks rising, the number of people fed by each food bank has increased from 68 in 2009 to 850 in 2013.

Even more depressingly, every organisation the Assembly asked is only expecting food poverty to increase. Rising prices, utilities, rents and the squeeze on wages and benefits means that often, the food bill is one of the few things left to cut. Food banks deliberately don't provide long term help, but expanding school breakfast clubs and getting all children eligible for free school meals to take them up could be part of the solution; schools can also provide education to parents and children for how to make budgets go further.

The Assembly wants the Mayor, his advisor Rosie Boycott and the London Food Board, and the boroughs to make London a Zero Hunger City. It's a major issue not just for the people involved and their health, but the impact on the NHS of treating diseases caused by unhealthy eating and malnutrition (this latter mainly suffered by older people). And that's before we even start on the idea that anyone in this marvellous 21st century metropolis should be going hungry or have the bulk of their diet made up of fried chicken and horseburgers.