Acceptable In The 80s: Cocktail Party At Maggies 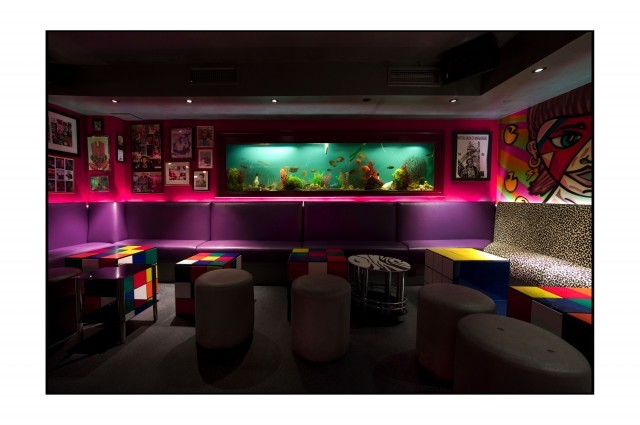 Neon-splashed 1980s refuge Maggie’s sits in the heart of Chelsea, a homage to the Prime Minister of the era, Margret Thatcher (you might be aware of her work). The playfully garish décor features a UV mural, giant fish tank, and huge Rubik’s cube tables that will inevitably set off some kind of ‘nam-style acid-flashback.

Bursting with love for all things of the decade — including the loo speaker system, which blasts out Mrs T's famous speeches — the venue is hosting a kitschy night to commemorate the 25th anniversary of the film ‘Cocktail’ on Thursday 23 May.

This celebration of cocktails and (largely unfulfilled) dreams sees the launch of the LED table menus, featuring new tipples, such as the ‘Razzy Cointreaupolitan’ with a berry heavy edge, and the ever-popular ‘Brandy Alexander’ served with marshmallow and brandy snaps. Old school classics like Babycham and pina coladas are also on offer, and provided by staff styled as Tom Cruise’s character Brian Flanagan. We’ve yet to confirm the look-alike factor though, as all our enquires have so far been met with ‘we don’t quite know’ and ‘please stop calling us’.

Turn up early like an uber-keeno before 11pm, and you’ll be able to join in on a special tasting session of sharer cocktails, such as the ‘Wall Street Martini’ and the ‘Maggie’s Head’, which is served in a mug blessed with the former PMs countenance.

We do, however, have to shatter the myth doing the rounds that you must have been born during the magical 80s to gain entrance to the bar. This is not true, as logically speaking, they’d be limiting their clientele somewhat. So for all you 30 year olds and over, the next time you accidentally engage with a super-perky, over-achiever 10 years your junior, you can’t shake them off by drowning your sorrows here. Although we’ve clearly just spotted a gap in the market.

We’ll see you in there.