Will There Always Be A Tube Map? Yes, And Here's Why

By Londonist Last edited 106 months ago
Londonist Will There Always Be A Tube Map? Yes, And Here's Why

Earlier this week, we discussed whether new technologies might one day render the famous diagram redundant. Could a souped-up journey planner or disruptive technology like Google Glass offer better navigational help? Today, Max Roberts, author of Underground Maps Unravelled, argues that the trusty map is here to stay.

Wouldn't it be great if you never had to think again? If someone or something else took charge of all the difficult decisions in life? Where to eat, what to eat, how to be entertained, what books to buy, what music to listen to, what clothes to wear, what style to decorate the house, oh yes, and in the event of needing to leave the house for any of these, how to get there by public transport. Actually, there is a word for what happens to people when they are mollycoddled 24 hours a day, never having to take important decisions for themselves, they become institutionalised. They become incapable of thinking for themselves from lack of practice. The difference is, these days, this malady is often self-inflicted. 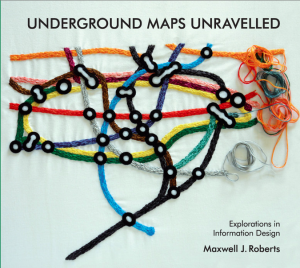 Whether or not we still need maps is a small issue, the wider problem is the tendency of people being relieved of (and relieving themselves of) the necessity to think. I see a lot of this in my day-job which, ironically and somewhat worryingly, happens to be as a university lecturer. Of course, if people are absolutely determined to eviscerate their own intelligence, that is their right and their own business. I look forward to the opportunity to sell them the Eiffel Tower in ten years time once they have completed the process. Psychology research shows that people low in intelligence lack an awareness of their own failings. The rot will therefore set in surreptitiously so that you won't even realise that you are losing it.

It is particularly frustrating when the powers-that-be conspire to prevent people from thinking for themselves, by withholding the necessary tools. Plan any sort of journey by public transport, and the chances are that you will either be offered, or forced to use some sort of computer journey planner. Try to find a map or (even harder) an actual timetable, and you go into battle with the computer. We might reflect on whether programmers who are incapable of designing an easy-to-use website are capable of creating effective journey planning software: getting from A to B is not an easy task, so why should computers be any good at it?

Bad journey planning software wastes time and money. I had endless trouble persuading the TfL journey planner that the Waterloo & City Line was a valid component of getting from Liverpool Street to Waterloo; eventually it decided to send me from Liverpool Street to Oxford Circus and then on the Bakerloo Line to Waterloo. Weird. Trying to use the SNCF journey planner to get from Nancy to Luxembourg was even worse. There was a distinct lack of trains, which just didn't seem right. I eventually managed to find a PDF of the timetable, carefully hidden in the depths of the regional pages. It showed a frequent service even on a Sunday. I phoned up the telephone helpline for clarification, where the call centre drone refused to believe that the computer might be wrong. I gave up. Just as well, because when we booked the journey at Nancy, we found that the PDF timetable was accurate, and that there was a weekend special price of 30 Euros return, rather than the 100 Euro ticket that the computer tried to persuade us to buy.

The problem for a tourist is that there is no way of knowing whether a computer journey planner is giving out garbage or not. In the above examples, my knowledge and intuition told me that something was wrong, but these were acquired from years of using maps and timetables to plan journeys. People who rely on computers right from the start will never attain this level of expertise. Even if computer journey planners were perfected so that they could be relied upon, people should still avoid using them. Computer journey planners turn people into permanent tourists, never learning about their home city and how it is organised, never appreciating the structure of the transport network and how its components relate, and taking away the opportunity to learn the subtle tricks that can make the difference between catching and missing the last train home.

Why do people need to learn about the shape of a city and the structure of its connections? No matter how careful, one day the device will be lost or stolen, or the batteries will run out, or the real-time network status information will fail to upload. The traveller, having evaded the opportunity to learn so far, and never really planning a journey before, will be utterly lost. Hopefully the computer terminal at the station will be working, or there will be someone to ask. Sometimes all computer guidance will be useless. One Underground strike a few years ago, with central London in chaos, I was walking along Oxford Street and overheard one end of a mobile phone conversation, where someone, extremely upset, was shouting "at this rate it will take two hours to get to Liverpool Street". "I can walk it in 45 minutes" I thought. And I did.

There is something deeply unnerving about being sent from A to B with no idea of what is happening in between. It is possible to cross Europe by train, but almost impossible to find out where exactly the journey is taking place. Again, it would be useful to have some guidance (so that alternative routes can be identified in case there are missed connections) and input (so that preferred routes can be chosen). If the region is particularly scenic, it might be nice to know where it is so that it can be visited again. Suddenly, points between A and B become mysterious and ephemeral. Did they exist at all?

What we really need is choice. I would not ban journey planners tomorrow, even if I had the power, but to all those people who want to take away my maps and timetables, I query their motives. Are they made insecure by people who are self-sufficient? Do they have such a narrow view of humanity that their own way of living is the only one they understand and tolerate? Transport undertakings tell us that computer journey planners are the future, that people want them but, worldwide, London included, the quality of traditional journey planning aides is so dismal that people are being driven to alternatives. Too many transport officials are clueless about human cognition: how people understand and make sense of the world, and from this how people make decisions. The general public are bombarded with information that is superfluous, ambiguous, or downright wrong, so of course they are going to seek help in other ways. I believe that there is an obligation for every transport undertaking in the world to provide outstanding information about their services in all relevant formats, so that people can select their own methods of planning a journey. People who wish to learn about the network that they are using and its city should not have this opportunity taken away from them.

Has the time for printed maps gone? Probably not, there is something about a map on paper that is very special to many people, and the true impact of an exceptional design can only be appreciated via a large-format poster. What about the maps themselves irrespective of medium? A map of an entire city communicates a powerful message. A good one says to you: this is the network — look at all the places you can get to, and it's going to be so easy to get to them. A small snapshot of a map, or typing street names into a journey planner can't even begin to be a substitute. How will Crossrail be publicised? And Crossrail 2? Via a map! As long as networks expand, only a full map can show this in a useful way.

Perhaps paper will become a niche medium when inexpensive A3-sized foldable/rollable high resolution computer displays become available. Far from the end of maps, this might be a new beginning. Big enough to show the network in full, even giving people the option to choose their favourite way of presenting it, and zoomable to show local streets and bus stops, with a variable level of planning assistance (depending on what is requested), and real-time visual updates to indicate disruption. The trick is for computer devices to enhance and develop people's cognitive potential, not replace it. Just make sure that the batteries don't run out. Better keep a hard copy in your pocket just in case.

Underground Maps Unravelled, Max Roberts' excellent exploration of the psychology and design of Tube maps is strongly recommended. You can get hold of a copy here.