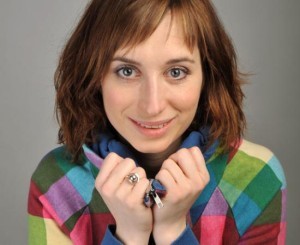 Sunday 31 March: After overindulging in chocolate, get yourself down to The Crown and 2 Chairman for über-handy comedy website London is Funny's own night to see Paul Sinha, Elis James, Will Franken, Liam Williams and MC Tom Webb (7.30pm, £8).

Monday 1 April: We're not quite sure how Alternative Comedy Memorial Society plans to cram all these acts into one evening, but be at the Soho Theatre to find out: Londonist favourite Andrew O'Neill, Aisling Bea, Tom Neenan, Ben Partridge, Maeve Higgins, Chris Coltrane, Will Franken, Jonny and the Baptists, John-Luke Roberts, William Andrews, Nadia Kamil and Sara Pascoe (8pm, £12.50).

Friday 5 April: Invisible Dot has two shows tonight: be there by 7pm for a free hour of character comedy from Jamie Demetriou (might be an idea to reserve your place in advance) and hang around til 8.45pm to see Sara Pascoe and Two Episodes of Mash (sketches from Diane Morgan and Joe Wilkinson) as part of the Claudia O'Doherty Experience (£10).

Saturday 6 April: Mark Thomas headlines Live at the Chapel, with Tim Key (have you seen his cameo in I Give It A Year? Made us literally weep with laughter), sketches from Cardinal Burns, Alun Cochrane MCing and the third time Will Franken's turned up in these listings this week (7.45pm, £18 / £16).

Tip us off to friendly, intelligent, alternative comedy around town tips@londonist.com, read our guide to watching live comedy in London and our top 10 themed comedy nights.