By M@ Last edited 112 months ago
M@ Breaking News: Fire At Newington Library And Cuming Museum
A large fire appears to have broken out on the roof of the old Walworth Town Hall building containing Newington Library, a one stop shop for council services and the Cuming Museum. Photos show great plumes of smoke and flames coming from the Grade II-listed building, situated on the corner of Walworth Road and Wansey Street. The Cuming Museum is one of London's true treasures, containing any number of unusual exhibits, such as artifacts from Captain Cook’s voyages, Bonnie Prince Charlie’s hair, protective amulets, mummified wheat from ancient Egypt, a Zulu fly-wisk and a piece of cake from Edward VII’s wedding.

Update: 3.12pm: Two hours after the fire was reported by the London Fire Brigade, and the Evening Standard web site still has no mention on its front page (or any page). Good work, guys.

Update: 2.32pm: Another close-up photo. And another, showing fire fighters perched above the blazing roof.

Update: 2.24pm: Southwark Council has issueed a statement confirming that there are no reported injuries at this time. They add:

"It is too early to say what the cause of the fire is and how long services from that building will be suspended for. It does not appear at this time that surrounding buildings or any residential properties have been affected but we will continue to monitor the situation very closely and continue to assist the emergency services where we can. Whilst our first concern is for the safety of residents and our staff, we are also worried about possible damage to the museum's collection."

Update: 2.19pm: A close-up photo of firefighters attempting to extinguish the flames. The irreplaceable collection of the Cuming Museum is housed on the ground floor, and could be liable to water damage even if the flames don't get to it. Other artefacts are reportedly stored higher in the building and are clearly at risk.

Update: 2.15pm: The Brigade’s Assistant Commissioner for Operational Assurance, Dany Cotton, said: "We’ve got almost a hundred firefighters working hard at the scene to bring the fire under control. It’s [a] large blaze and the whole of the building’s roof is alight but fortunately we’ve not had reports of injuries.”

Update: 2.13pm: @LondonFireBrigade reports that 15 fire engines and 97 firefighters are on the scene. No injuries have been reported. 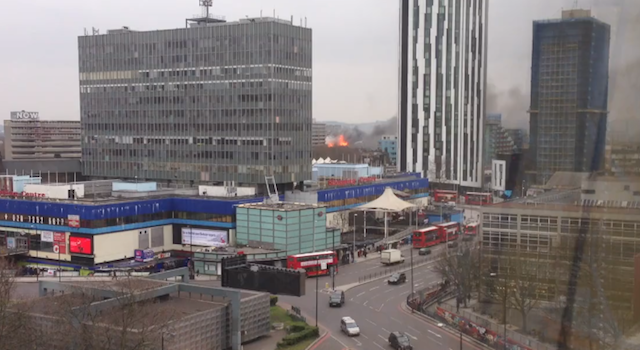 Update 2.10pm: @Omokad has a close-up picture, showing the intensity of the fire.

Update 2.06pm: Here's a video from the Elephant roundabout, from which the photo above is taken.