Things To Do In London Today: Monday 11 February

If you haven’t already, you can subscribe to these listings and get them delivered to your inbox at 7am every morning. Here’s how. And if you like what you see, please spread the good word.


KIDS: Imagine Children’s Festival begins at the Southbank Centre today and runs all the way through half term. There are all sorts of free and ticketed events, check the website for more details.. Today 7-10 year olds can take a tour round the Centre and create London Adventure poems.

BLOOD: Give it up at Freemason's Hall, Covent Garden today, or book an appointment convenient to you with the National Blood Service.

PHOTOS: A photographic exhibition about concrete marvel Stockwell Bus Station opens in the concrete marvel of the Royal Festival Hall today. Free, just turn up from 10am.

CHOIR: Choral Scholars of St Martin in the Fields sing Byrd and Britten in an hour long concert at the church. Tickets £10, prebook or just turn up, starts 6.30pm.

ORIGAMI: Fold the one you fancy something creative out of paper at Sesame's Valentine's Origami night on the rooftop at Queen of Hoxton. Tickets £6 (includes hot booze drink), prebook, starts 7pm.

MORE COMEDY: David Baddiel tries out new material after 15 years away from stand up at Soho Theatre. Tickets £12, starts 9.30pm. 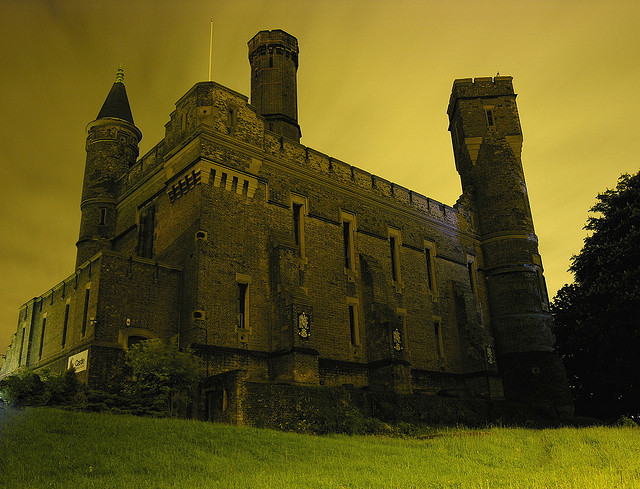 Ever wondered how the fantastically gothic Castle Climbing Centre in Stoke Newington came to be? It was built as a Victorian pumping station between 1852-56, helping the New River (400 years old this September!) to bring more fresh water into the City. The Surveyor of the New River Company, William Chadwell Mylne, based the design on Scottish baronial castles. Some say he was on the verge of retirement and could therefore indulge in architectural whimsy without fear of the sack. Others say it was a response to local residents who didn't want their largely pastoral view spoiled by an ugly industrial erection. Either way, the fanciful folly of a Medieval fortress was positively embraced and is still there to do this day, now Grade II listed. It's treasured by locals, does excellent service to climbers and surely surprises all who behold it.

Good Cause of the Day
Send tips to lindsey@londonist.com

Fundraising for a second helicopter is a current priority. Want to help? You can make a donation, buy something in their shop or play their lottery.

If the weather were performed by Reception Class in assembly, one might expect a huddle of four and five year olds dressed in wellies, coats, scarves and mittens, rubbing their arms, stamping their feet in slush and saying BRRRR theatrically. Classmates shrouded in grey cotton wool clouds stand on stools nearby and lightly shower them with a watering can from time to time. The intermittent smiles of small children indicate unpredictable bright spells. BBC Weather enlightens more sensibly.