How To Party Rio Carnival Style In London

You can't afford the air fare or the time off work but you can still lift your spirits with a flavour of Rio Carnival in the capital this February. 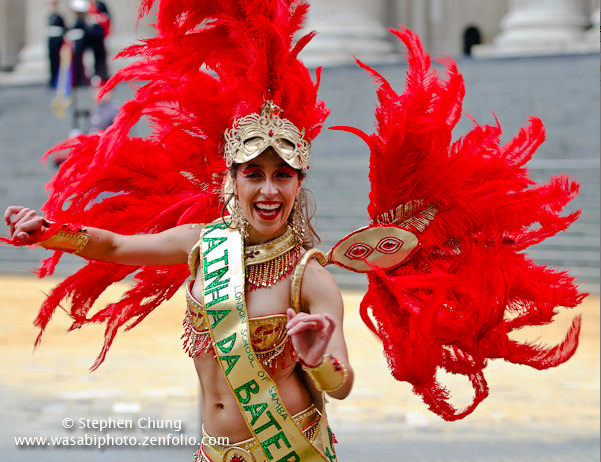 London School of Samba heats up the streets of Covent Garden with a pre-Carnival parade through the Piazza to Brazilian bar, Guanabara on Parker Street between 7-7.20pm.

Later that night, their live bateria and samba dancers will perform a 45 minute live set at 10pm as part of a London v Rio party night at the club. Entrance £10 after 8pm, open 5pm-2.30am.

Over at Rich Mix there's a night of Bahia beats, mixing samba with urban London sounds and a little bit of reggae for funky samba and Brazilian roots music to get you feeling hedonistic. From 8pm till late, entry £7/£5.

The Carnival Weekender warm up at Guanabara marks the start of six night's caipirinhas and Brazilian food. Get into the right gear with soul and funk, live drums, samba beats and a performance from samba experts, Samara Reis and Eddie Souza. Entry £5 after 9pm, open 5pm-2.30pm.

As the first weekend of Rio Carnival gets underway, Paraiso School of Samba take their team of 25 dancers and musicians to Guanabara for the Samba School of Madness. Expect dazzling displays, live drumming, Brazilian DJ sets and a special performance of the Samara Reis Samba Show. It's preceded by the Carnival Parade and Taste of Brazil Dance show. Entry £10 after 9pm, the night runs from 5pm - 2.30am.

The Bal Masqué – Cream of Carnival is the masked ball at Guanabara where you are encouraged to cover yourself in glitter and body paint and be part of a samba marathon. It's £10 entry all night from 5pm-4am.

Micareta da Bahia is the closing party for this year's Carnival celebrations at Guanabara. It's a night dedicated to the state of Bahia, with live music, Djs and an Axe dance class. Free entry, open 5pm-2.30am.

London School of Samba band and dancers make another appearance, this time at the Floripa Bloc Party in Old Street from 5pm-2am. It's free entry, but book a table.

Sushisamba does Carnaval upmarket and up high on the 38th and 39th floor of Heron Tower. There will be shimmering samba dancers, live drummers, DJs and a special menu. The £75 ticket price includes aperitivos, caipirinhas and entertainment.