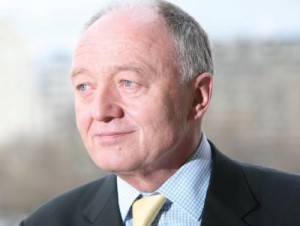 This is the fifth year the LSE has put together its Space for Thought literary festival, always a collection of fascinating panels, guests (writers plus academics) and ideas. And it's all free. We've picked out a few of the ones that made us do involuntary 'oo' noises.

Ken Livingstone is the big draw on Thursday 28 February, talking to Tony Travers about his life in London politics. Always a divisive figure, if you want to know what he has to say for himself book yourself a long lunch: his slot is 1.15pm-2.30pm.

Four brilliant comedic minds gather on Saturday 2 March to ponder comedy as social commentary. John Finnemore, whose radio sitcom Cabin Pressure seems to have left fans weeping over its cliffhanger ending, Getting On's Vicki Pepperdine and producers Gareth Edwards (Mitchell and Webb, Warhorses of Letters) and John Morton (Twenty Twelve, the much acclaimed People Like Us) offer their opinions.

Will Hutton and Polly Toynbee are some of the 'witnesses' as proper QCs put austerity on trial, on Friday 1 March. The verdict will be decided by a jury of young people and the audience gets a chance to question the experts.

Pat Barker's latest novel, Toby's Room, continues her oft covered themes of art and war. She'll expand on these ideas as she talks to Dr Susannah Biernoff on Saturday 2 March from 1pm.

Martin Rowson, DJ Taylor, the Guardian's John Crace and Ewan Morrison talk about the highs and lows of parody on Friday 1 March.

If you pop into the LSE atrium on 2 March you'll also be able to hear a collaboration between Liars' League and Arachne Press, whose London books Stations and London Lies we like a lot. Actors perform short stories from these collections and a third, Lovers' Lies.

Have a look through the whole programme and see what catches your fancy; there are interesting sounding sessions on memory, new media and digital publishing, maps, women's history and ageing.

The LSE Space for Thought Literary Festival 2013 runs 26 February-2 March at the London School of Economics, in the New Academic Building, 54 Lincoln's Inn Fields. Tickets are free but a ticket must be reserved, maximum two per person.