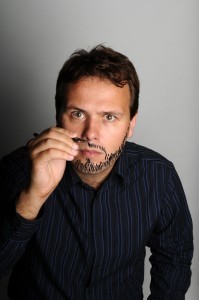 John Finnemore writes the Radio 4 sitcom Cabin Pressure, lurks in the background of BBC Two’s Miranda, and occasionally has a beard. Earlier this month he launched the first of six fortnightly warm-up shows for his upcoming Radio 4 sketch show, which seems a bit previous seeing as he doesn’t even have a name for it yet. We caught up and asked about sketch nights, the creative process and what the big deal is with radio.

Q. Who are you and WHAT do you think you’re doing?
A. I am not a burglar. I am a… a freelance estate agent. Yes, that’s right. Nice place you have here.

Q. Tell us a little about the upcoming shows
A. Well, if you insist. They are fortnightly sketch shows at The Albany near Great Portland Street, in preparation for my new show on Radio Four this autumn. The first one featured the people of the Country of the Blind realising that the one-eyed man is almost uniquely badly qualified to be their king; Winnie the Pooh’s friends helping him come to terms with his destructive relationship with honey, and a snow leopard. But then, every fortnight is entirely new material, so that may not be all that helpful.

Q. Every fortnight you’re coming up with an hours’ worth of new material – how. How do you have so many ideas, John. How.
A. Well, you’re the ones who’ve used the phrase ‘Godlike genius’, I myself would never presume to… oh. Didn’t you? Well, the truth is that I only have about two to three ‘free-range’ bolt-from-the-blue ideas a year; all the rest are battery-farmed, stare-at-the-blank-paper ideas, and the way to have more of those, I have discovered, is to tell everyone that if I don’t produce an hour of new material every fortnight, they can have their money back.

Q. The shows are a ‘work-in-progress’ – what does that mean for you? Do you get ultra-sensitive if a joke falls flat and weep in the dressing room afterwards, or are you more likely to write it off and charge on to the next one? Are you making notes?
A. I am all about the notes. Some things get written off, but mostly, I’m looking out for the stuff that I can cut, edit, or re-write completely. I think the main difference between people who write good stuff and stuff that’s, you know, fine, is how many times they are prepared to rewrite it. That’s not to say I’m presuming I’m one of the ones who write good stuff, but at least I’m trying to be. And after all, you’re the ones who called me a Godlike genius. Oh. Still not yet? Ok.

Q. You have a radio sitcom and now a radio sketch show, as well as TV credits – how do the two differ? What do you like about working with radio?
There are three things I particularly love about radio. One is the unlimited budget - in my sitcom, there is a scene in which a Scottish cricket eleven carry a fire engine across an airfield runway, against the backdrop of the Sahara desert. It was surprisingly cheap to record. The second is the immediacy of it - once the commissioners say yes, you and your producer are more or less left to get on with it. This is not quite true of television. And the third, and perhaps the most fundamental, is that people have let me make programmes on it.