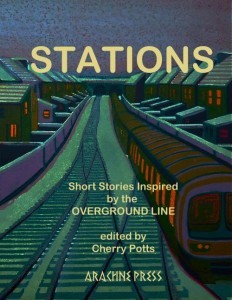 The Overground finally became a circle yesterday, but we're winding back a bit to the old East London Line and a collection of short stories celebrating each station along its length. From the same stable that brought us London Lies, Stations was created by people sending in tales based around each stop between Highbury and Islington and West Croydon.

Some stories are more loosely based on the stations than others: there's an SF adventure within the confines of Haggerston and self-discovery at Whitechapel, whereas Sydenham is a pensioner's regretful reminiscence that just happens to take place on a train, and a very funny piss-take of hipsters from Katy Darby bypasses Shoreditch High Street but nails the area's essence.

There's a surprising amount of emotional depth for an anthology sourced from open submissions, much of it bittersweet and yearning, particularly the further down the line we go. Sadness shot through with flashes of beauty: perhaps that's a perfect metaphor for south east London (before the hate comments start, this is being typed in Lewisham) but those are the entries that have stayed with us. We'll never look at Penge West the same way again.

Stations is published by Arachne Press, £10.99. Available from Amazon or your local bookshop.