If you haven’t already, you can subscribe to these listings by email, to receive them in your inbox at 7am every morning.

TRANSPORT: If you have an opinion on the state of London's transport (ha!), independent transport watchdog TravelWatch is holding a public meeting at City Hall, for all to attend. Free, just turn up, 10am

STATS AND THE CITY: The Mayor’s former transport advisor Kulveer Ranger speaks at Imperial College about the use of data in managing a city. Free, prebook, 6pm

FEMALE SINGERS WANTED: Discover the joys of singing four-part a cappella harmony in barbershop style by coming to this open rehearsal of London City Singers. Women of all ages are welcome. They'll be at the London Welsh Centre, 157-163 Gray's Inn Road. Free, prebook, 6.30pm

CYCLING: If you like bikes, design, photography, beer or any combination thereof, head down to Look Mum No Hands cafe to meet similar bike-minded folk at the second meetup of bike blog CycleLove. Free, just turn up, 6.30pm

TALK: Several survivors of the Holocaust gather at the British Library tonight, to share their memories. £7.50, prebook, 6.30pm

ALT.PUBQUIZ: The Water Poet in Spitalfields is the new home for Quiz & Paste, an alternative pub quiz that mixes in games, fancy dress and all kinds of silliness. Email quiznpaste@gmail.com to prebook and get some clues. £5, prebook or just turn up, 7pm

PUBBY SCIENCE THING: Is a scientifically literate public possible…or even desirable? And what do ‘science’ and ‘public’ mean in this context? Alice Bell speaks at the Big Ideas debate upstairs at The Wheatsheaf in Fitzrovia. Free, just turn up, 8pm

COMEDY: TV personality and BAFTA winning star of The Armstrong and Miller show Alexander Armstrong presents banter, mirth and music with his band at the Hippodrome. £25-£35, prebook, 8pm

Random London Fact of the Day
The south side of Finsbury Square, now home to the flashy Bloomberg offices and gallery, was widely known as Sodomite's Walk in Georgian times, for easily deduced reasons.

Good Cause Of The Day 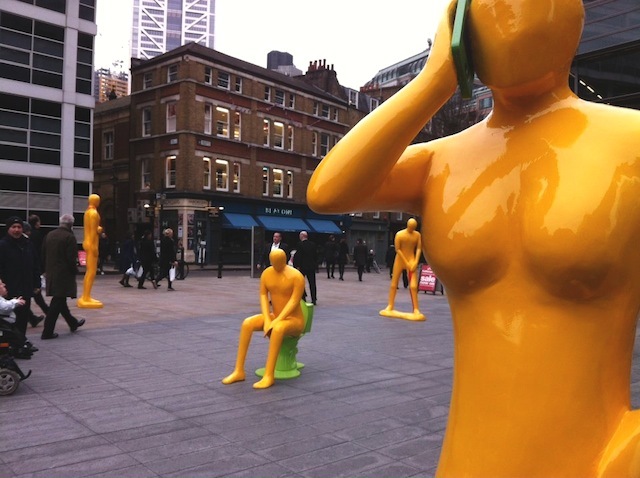 There's a prominent campaign doing the rounds at the moment, imploring us to stop going to A&E departments with trivial ailments. Many minor injuries or illnesses are better treated, and more quickly, at other local health centres. To help spread the word, these eye-catching yellow mannequins are popping up around town, showing a few of the indications for which you're better off finding a pharmacy, GP or walk-in centre. Today, they'll be appearing in the Stratford Centre. From thence, Walthamstow (Wed), Hackney (Friday), and so on. The campaign also has a website with info about where to go for help with various maladies, although not everyone thinks it's well-thought-out.

London Weather
Drizzle early morning, and a windy old piss-down at lunch, yet the forecast predicts a dry spell around 11am. That's the time to pop out and get your sarnie. That's the dry window of opportunity. Impress your moist, grumbling colleagues with your superior powers of anhydrous hunter-gathering by heading out that little bit earlier. Then tell them you got the tip from Londonist, and that they should read it too, unless they want to forever look foolish and damp. The fools. BBC Weather has more.