ANNIVERSARY: As the snow and ice take hold, remember the 40 people who dies while ice skating in Regent's Park on this day in 1867.

TUBE: A lunchtime talk at UCL recounts the history of the Underground in the local area. Free, just turn up, 1.15pm

TOUGH BACTERIA: Learn about extremophiles, bloody hard bacteria that can exist in stupidly hostile environments.  It's a public event at UCL’s Department of Chemistry — definitely not a hostile environment. Free, just turn up, 6.15pm

SCIENCE SHOWOFF: The Science Showoff event returns to the Wilmington Arms, as a bubble of science communicators take to the stage to share their passions — everything from the geology of Skyrim to monkey penises. Free but suggested donation £5, just turn up, 7pm

QUIZ: Try your hand at a science-themed pub quiz upstairs at the Ritzy, Brixton. £2, just turn up, 7.30pm 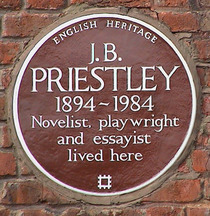 Random Fact Of The Day
Continuing our look at unusual Blue Plaques, did you know that a few memorials from the official scheme aren't actually blue? The plaque to JB Priestley in Highgate is one example. It's clearly English Heritage, but is presented in poo-brown rather than the usual hue. Other official brown plaques, bestowed by EH's predecessor on the scheme, London County Council, include anatomist Henry Gray and a certain Wolfgang Amadeus Mozart. With thanks to London Remembers and Plaques of London.

Charity Shout-Out Of The Day
A new section in which we highlight a different charity or appeal you might be interested in. Send ideas to matt@londonist.com

Every day in this article, we highlight the places in London where you can donate blood in London. But have you heard about blood stem cell donation? Those with leukaemia and other blood diseases can be saved with bone marrow transplants, but they need to find a donor with suitable cells. If you're 16-30, the best thing you can do is join the Anthony Nolan register. You'll be sent a 'spit kit' so the lab chaps can work out your cell type, which then enters their database to aid the hunt for future donor matches. Those over 30 can also donate, but should discuss it at a blood donor clinic first. You could be the last chance for someone on death's door. This appeal was nominated by Jonni Berger, who's currently seeking a donor to help his mum Sharon Berger (Twitter campaign #Spit4Mum).

London Weather
The snow's scarpered away over night. We barely knew it. In its stead comes a glorious winter's day of crisp, shiversome temperatures and blinding sunshine. A good day for extreme sunbathing, if such a thing exists.