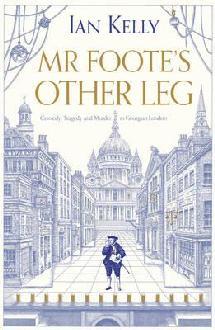 Ever heard the one about the amputee playwright Samuel Foote? Us neither. Ian Kelly's new biography seeks to rescue one of Georgian London's great forgotten characters, and succeeds with aplomb.

Foote was one of the 18th Century's great stage-smiths. He trained with Garrick under Charles Macklin, wrote dozens of successful plays and comedies and went on to hold the patent for the Theatre Royal, Haymarket. Yet today he is virtually unknown. Why? Because he was chiefly celebrated as an impressionist (perhaps the first great impressionist) whose topical sketches and impersonations would be lost on an audience just a generation later. Think: a luvvie version of Mike Yarwood.

Kelly's biography, then, sets out with a difficult task: how to enthuse readers about a performer they've probably never heard of, who impersonated characters they've also never heard of, and who died nearly two and a half centuries ago.

Despite this, he's written a biography that beguiles and charms in a dozen ways. Foote, it turns out, was no mere actor and impresario. He had a splendid knack of swaddling himself in tribulation. The book begins with his incarceration for debt and ends with his trial for sodomy (a potentially capital offence at the time). In between, he falls spectacularly in and out of favour with just about everyone in town, including the likes of Samuel Johnson, David Garrick, Joshua Reynolds, the Fielding brothers and John Hunter.

The book really shines, though, as a portal into 18th Century London. We see an astonishingly modern world where sex, scandal and  the cult of celebrity are promulgated by an intrigue-hungry press. Foote's sodomy trial was such a sensation that it kept the American Declaration of Independence off the front page. Yet medieval dangers remained. Foote's leg amputation took place in a time without anaesthetic or antiseptic. The scene is written in such frank detail, you'll want to hide behind the sofa.

Meticulously researched using newly discovered sources, Mr Foote's Other Leg will captivate anyone with an interest in the early modern stage, and 18th Century London in general. Everyone else will be swept along by the high farce, both on stage and off.

Mr Foote's Other Leg By Ian Kelly is out now from Picador. Buy here.