The Great Smog Of London, Tweeted 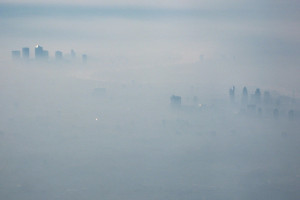 Wednesday is the 60th anniversary of the start of the Great Smog, which lasted 5-9 December 1952. Cold weather (and the increase in coal-burning to keep warm) combined with still weather caused pollutants to settle over London. Up to 12,000 people are thought to have died from the effects and 100,000 were made ill.

Starting at 7am, the Twitter account @ClimateActio2n from the Climate Action campaign group will start 'live' tweeting the #greatsmog in the voice of an ordinary Londoner. It'll be sharing real anecdotes and factual information. (There are about 400 tweets lined up so it's up to you to decide whether your timeline can cope.)

Air pollution isn't just a matter of historical curiosity and still kills around 4,000 of us each year. Green Assembly Member Jenny Jones says

We need some of the vision and determination shown in dealing with the great smog to deal with our own invisible killer. The problem of air pollution is still present and deadly, but is far less visible than it was during the Great London smog. It is strongly implicated in childhood asthma, respiratory and cardiac diseases and the shortening of life expectancy.