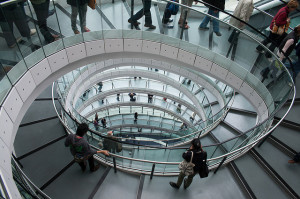 It's nearly Christmas, so is there evidence of peace and goodwill to all at City Hall? Yes, we laughed at the very idea too.

The morning began with a minor wrangle between Len Duvall and Boris Johnson over Gerard Lyons, the new economic advisor on a salary of £127k for a 30 hour week for a job that seems to heavily overlap with that of Deputy Mayor for Business and Enterprise Kit Malthouse. ITV London has an illustrative clip where Len says the total advisor salary bill now tops £1m, enough for one fire station. Boris responds with claims to have shaved £30m off the total City Hall wage bill, enough for 30 fire stations (so does that mean without job 'efficiencies', even more stations would have to close? Or is there any chance of that £30m being diverted into the fire service?).

We looked at the report into Stephen Greenhalgh's behaviour towards a female colleague yesterday, which again saw Len and Boris having what we're going to call a robust discussion over whether the Mayor was planning to take any further action or just let the whole thing go. It ended with Boris repeatedly saying "you can do better than this".

This is typical of Johnson's apparent belief that everyone is motivated primarily by politics. He's often accused Assembly Members concerned about cuts to public services of bandwagon jumping, and defended Stephen Greenhalgh's plan of spending one hour in each borough to consult on police service changes because the Deputy Mayor for policing will doubtless face "a fusillade of politically motivated brickbats". While there will always be some people who fall along party lines, we find this dismissal of a large swathe of concerned Londoners campaigning against cuts rather insulting.

There were questions about cuts to police and fire service budgets but we're sorry, nothing concrete is going to happen on these until the New Year and yesterday's session produced far more heat than light. You can get a pretty good idea of what went down by reading our reports of MQT from October and November.

Quickly rounding up some of the other issues discussed: passenger numbers on the cable car are falling week by week. Boris can't guarantee that no more public money will be put into the Olympic Stadium. Tony Arbour asked the cost of court cases dropped before trial and was told £3.1m a year, but suspects the true total is much higher when time is added. The Mayor also thinks Germany is an excellent example of a country where lots of people rent, but Tom Copley pointed out that German renters have protections that the proposed voluntary London Rental Standard doesn't come near. Nicky Gavron then asked Boris about the frustrations of several London boroughs – including Westminster and Kensington and Chelsea – that the Mayoral standard to fund affordable homes by renting them out at 80% of market rates is preventing them building their own homes for rent at much lower rates. Boris didn't agree with her.

And then the whole thing ended in farce when, instead of engaging with Jenny Jones's request to apologise for incorrectly saying that two-thirds of cycling accidents were the fault of the cyclist, Boris started demanding to know how many Assembly Members had cycled to the session that morning and then calling AMs "idle and shiftless" before being made to apologise. Like we said, not much goodwill in evidence.

You can watch the webcast of Mayor’s Question Time for yourself, or find out how to be there in person.