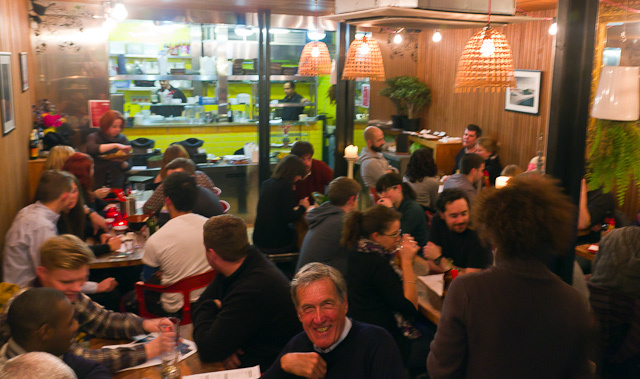 Last week, we hosted our end-of-year quiz at  Hôp Namô in Boxpark, Shoreditch. The crowd were treated to an onslaught of trivia — 40 questions all covering London happenings over the past year.

The venue was tiny (though wonderful), so we could only fit ten teams inside. But, thanks to the wonders of modern electronic technology, we can paste up the questions here for the wider populace to tackle. The answers are typed in white text beneath each question, so you can check your score. The winners last night got 31.5 out of 40.

Our unpredictable Mayor has, for some reason, grafted his face onto the heads of people who've been in the London news over the past year. Can you name them?

Round 2: Transport round
1. Ada, Phyllis, Victoria, Elizabeth, Mary and Sophia: what do these six names have to do with London transport?
A. Crossrail boring machines (half for ‘Crossrail’)

2. The final section of the London Overground, beneath part of which we’re currently sitting, opens in three day’s time and connects which two existing south London Overground stations?
A. Clapham Junction and Surrey Quays

3. Why did certain Central Line trains turn pink in the first quarter of the year?
A. Digital switchover (the mascot was called Digit Al)

4. The Cable Car was perhaps the most visible addition to London’s transport infrastructure in 2012. Which company managed to get its name onto the official Tube map by sponsoring it?
A. Emirates

Round 3: Politics round
1. In which London embassy did Julian Assange seek refuge in June, where he still remains?
A. Ecuador

3. Seb Coe played a blinder, organising the London 2012 games. But for which political party was he formerly a member of Parliament?
A. Conservatives

4. Which party fielded a Uruguayan national for the Mayoral election?
A. BNP

Round 4: Olympics round
1. Which of the following was not a serious proposal for the London 2012 games:
(a) City Hall to be temporarily sculpted into the head of Baron de Coubertin, founder of the modern Olympics.
(b) A giant statue of Christ to appear on Primrose Hill
(c) A full-scale replica of Noah’s Ark to sail up the Thames, complete with animals
(d) A floating walkway to run along the Thames from Blackfriars to Tower
A. (a) De Coubertin’s head

2. What were the names of the two Olympic mascots?
A. Wenlock and Mandeville

3. Which security company was widely criticised for failing to recruit enough staff for the games?
A. G4S

4. How many gold medals did Team GB win during the Olympics (just the Olympics, not Paralympics)?
A. 29

Round 5: Jubilee round
1. Which London borough was given Royal Borough status in February, as part of the Jubilee preparations?
A. Greenwich, to become The Royal Borough of Greenwich

4. During the flotilla, Her Majesty wore an outfit all of one colour - what was it?
White

Round 6: Museums And Galleries round
1. Which London tourist attraction announced in April that it will be moving to County Hall next year?
A. The London Dungeon

2. In April, which artist announced plans for a major new gallery in Vauxhall?
A. Damien Hirst

3. Which house museum is about to reopen after being shut for a year?
Dickens House Museum

4. Which museum has a famous walrus, who's about to go on holiday?
A. Horniman Museum

Round 7: Famous Londoners round
1. Which famous novelist celebrated his 200th birthday this year?
A. Charles Dickens

2. In February, a newly release MI5 file suggested that which famous Londoner, born in Lambeth, might actually have come from Birmingham?
A. Charlie Chaplin

3. Which London designer had a very busy year, creating both the Olympic Cauldron and New Bus For London as well as being the subject of an exhibition at the V&A?
A. Thomas Heatherwick

4. Whose house in Camden recently sold for £2 million?
A. Amy Winehouse

Round 8: Buildings round
1. Which London landmark won this year’s Carbuncle Cup - the annual award for the worst piece of new architecture in Britain?
A. Cutty Sark

2. The clock tower housing Big Ben was given a new official name this year. What should we now call it?
A. The Elizabeth Tower

3. What name is commonly given to 20 Fenchurch Street, one of the new City skyscrapers that topped out earlier this year?
A. The Walkie-Talkie

4. The red squiggly tower thing next to the Olympic stadium has an extremely unwieldy official name. Can you spell it correctly?
A. ArcelorMittal Orbit (full point for correct spelling and no space, half for the right idea)

Round 9: Unusual News round
1. Why did 29-year-old Dan Motrescu make the news in November this year?
A. He climbed a statue naked (Duke of Cambridge, Whitehall)

2. Which London landmark claimed in October to have the world’s longest Facebook timeline?
A. The Tower of London

3. What item on the Metropolitan Police’s phone bill was costing them £17,000 a year, as revealed in January?
A. Phoning the Speaking Clock

4. In which park did the so-called Dangleboris incident occur, in which the Mayor was left hanging ridiculously from a zipwire?
A. Victoria Park

2. The former Olympic Park will partially reopen in July. What name will it now take?
A. The Queen Elizabeth Olympic Park

3. Which London waterway celebrates its 400th anniversary in 2013?
A. The New River