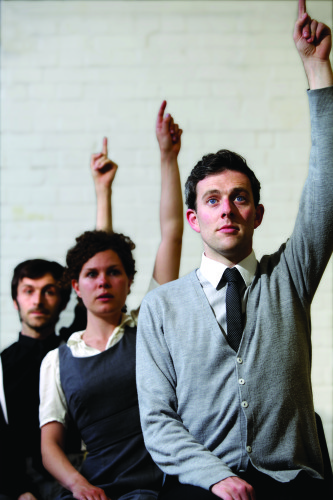 Has the UK's Golden Summer of medals, championships and victory parades made you feel a bit useless by comparison? Then head down to South London for a new theatre production that celebrates failure in all its many guises. Whether it's cheating at board games, missing out on a driving licence or never quite managing to call home, Ten Out of Ten enjoys the refreshing perspective that failures are just important as successes.

Devised by Terry O’Donovan, Stuart Barter and Clare Dunn, Ten Out Of Ten is an interactive show that lets the audience share their own experiences through hand-raising, games and music. Audience members are greeted by three experts who analyse life's achievements and failures — whether brownie badges, swimming certificates or disatrous first dates. "Often life gets dull and dreary and we can feel down or unsuccessful, like we’re not achieving anything," says producer Faith Dodkins. "Life gets in the way and we find it difficult to frame our successes. However, if you look at things really closely, these ‘failures’ actually seem quite trivial, even if they sometimes feel so important."

The show aims to explore the absurdity and the humour inherent in apparent failures, however painful they may seem at the time. Faith, who in the spirit of the show confesses to having once flushed a hamster down a toilet and not understanding climate change, adds: "We don’t want to diminish or make light of people’s apparent failures, in fact we want to laugh with them and celebrate them as moments in life that make you who you are – in many ways failures are as important as successes and we wanted to make a show that reflects this."

Billed as an evening of achieving, the show includes live music, laughter and plenty of chalk. We think Ten Out of Ten is a welcome opportunity to embrace those bits of yourself that don't usually appear on the CV.