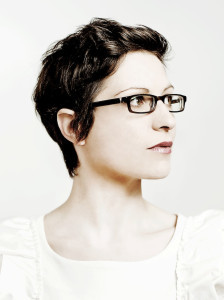 From the outside, Helen Arney's show Voice of an Angle might appear worrisome. There's a pun in the title. There's a lot of Powerpoint. There's a ukulele. But stay with us here.

The thing about comedy is that charm can get you through almost anything, up to and including that groaner of a pun. The thing about Helen Arney is that she has all of the charm. After the first song, subtitled by the projector screen beside her, the legend MY FAVOURITE TRIANGLE pops up on the screen, and people of a certain disposition (i.e. "huge nerds") are officially in. A strong opening and an audience will forgive you anything.

Voice of an Angle is a show about science, music, language and the tiny slice in the middle of the Venn diagram of those three things. Edutainment, then, but with an emphasis on the -tainment. There are a couple of missteps in the material, but Arney carries herself through them in her performance: excitable, knowledgeable, slightly hyperactive. That's not even to mention the songs, all good, solid musical comedy.

This is a comedy show pitched at the nerd crowd without the pandering that ordinarily comes with the territory. The songs are great, the educational bits in between them are great, Helen Arney is great.

But then, we might be biased because we (and everyone else in the audience) got a certificate at the end. Londonist loves to be rewarded for its efforts.

Helen Arney: Voice of an Angle plays at the Soho Theatre until the 27 September (tonight!). Tickets are available from the theatre website. The busy comedian will also be appearing most nights in October, including a run of the Festival of the Spoken Nerd and the Ugly Animal Preservation Society.