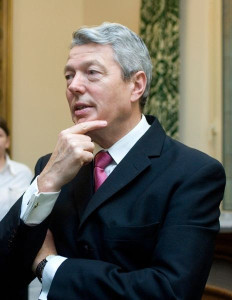 Labour's former Home Secretary and shadow Chancellor Alan Johnson has revealed that he considered running as his party's candidate for this year's mayoral election, and is thinking about doing the same in 2016.

Eagle-eyed mayor spotters will realise that this isn't news. Two years ago this month we wrote a short piece on the prospects of a Johnson vs. Johnson match-up, noting that the Paddington-born ex-postman might make a decent foe for the Conservative incumbent. Admittedly, this was at a time when putative Labour candidates included less plausible figures such as Peter Mandelson and Alan Sugar.

In this week's interview with The House, a weekly magazine in Parliament, Mr. Johnson reveals that he is also considering a run in 2016. Given that since 2010 he's bottled out of the Labour leadership gig and hastily quit his position as shadow Chancellor, the MP for Hull West and Hessle will have to shed his growing reputation as a serial ditherer if he's to prevail.

Full coverage of the 2012 Mayoral race