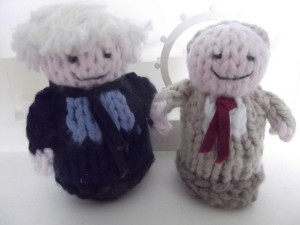 Last week, Lord O'Donnell became the latest in a line of public figures to bemoan London’s 'Punch and Judy' politics.  And he should know – having been head of the civil service right through the Blair-Brown years, he saw plenty of political abuse and battery first-hand.

We fear, though, that he's trying to hold the tide back with one hand. Ever since its inception, when Ken-the-ever-Livingstone first came back from the dead to sweep to victory as an independent, it's been clear that winning the top job at City Hall was more a matter of being famous and shouty, than of demonstrating managerial skill or sound policy.

Partly this is a matter of history: that 2000 election, when Ken managed to wipe out the more controllable candidate put forward by the Labour machine, set the tone for everything that followed. But also, we suspect, it's inherent to the role. For one thing, the mayor is the most high-profile individual elected anywhere in the UK: that will inevitably attract the self-publicists.

More than that, though, the mayor's limited financial power means that the role functions more like a bully-pulpit than a CEO. If you're trying to cadge more money out of the Treasury, or to shame TfL or the Met police into sorting themselves out a bit, a knack for high-profile shouting may actually be the most useful talent you can have.

But there’s a danger to all this, too. That is, that we pick mayors who are brilliant at getting their names in the paper, but rather less skilled at running anything. It's no coincidence that London has had a pair of mayors better known for their media work and a string of high-profile gaffes, than for their actual policy achievements.

Focusing on the most high-profile candidates also risks dividing London. The role has become as polarising as the US presidency: to put it bluntly, we have yet to have a mayor who large numbers of Londoners don’t hate.

Perhaps most frighteningly, both Boris and Ken seem all but indestructible. After everything they've done, every mistake they've survived, it's surprisingly hard to think of a screw-up either could make that'd be serious enough to finish them off for good. That's great for their careers – but rather less brilliant for their accountability.

All this means that May's election will be fought on personality as much as policy – so this week, we'll be taking a look at the personalities in question. Londonist is avowedly impartial; but it'd be a tad misleading to pretend that the two leading candidates for the role don't provoke strong feelings.

So, we've asked a pair of guest writers to present the case against each of them. Tomorrow Tom Barry, better known as Boriswatch, will be explaining why Johnson doesn't deserve re-election. On Wednesday, Chris Mounsey, a libertarian activist and blogger who goes by the name Devil's Kitchen, will give us the view of Livingstone from the right.

Later in the week, we'll take a closer look at the candidates' biographies. And we'll be asking – what would it actually take to finish either of them off?

In the meantime, though, what do you think? Is O'Donnell right, that politics-by-shouting-match is holding London back? Or is it the only thing that'll make the voters sit up and take notice of the real issues?